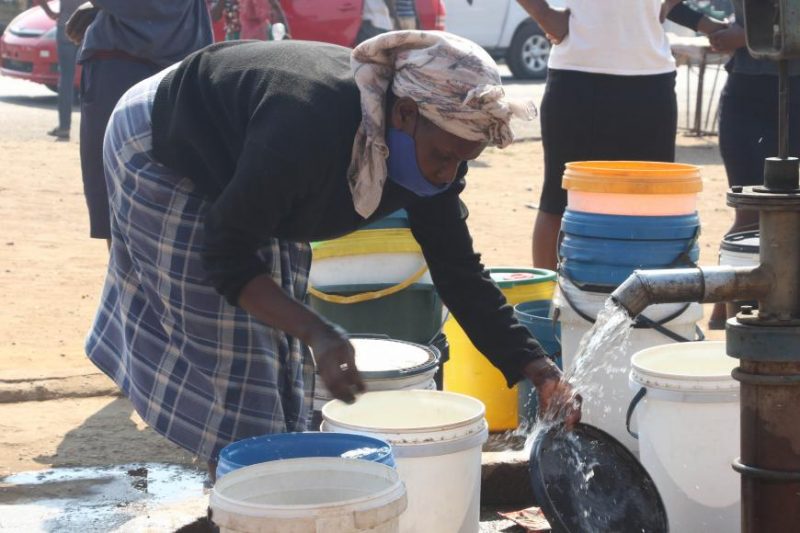 A woman collects water at a borehole in Mabvuku, Harare
Spread This News

Zimbabwe’s central government and the Harare City Council should urgently act to ensure clean water for millions of people affected.

The water situation in Harare is largely the same as in 2008, when Zimbabwe experienced the most devastating cholera outbreak in Africa in 15 years.

Human Rights Watch found that the city’s perennial water crisis, which is linked to the cholera outbreak, is the result of the city’s obsolete water infrastructure, a ballooning population, severe droughts, and pervasive government corruption and mismanagement.

Poor governance and disputes between the central government and the Harare City Council have hindered efforts to address the problems.

“Zimbabwean authorities at the national and local levels should work together to promptly and permanently end Harare’s dangerous water problems.”

Human Rights Watch interviewed 85 people in October 2019 and July and August 2021 water in five densely populated, or high-density, areas (Budiriro, Glen View, Highfields, Mabvuku, and Mbare) who had no access to safe drinking water: in Harare, the peri-urban informal settlement of Epworth near Harare, and the surrounding towns of Chitungwiza, Norton, and Ruwa.

The infrastructure for piped water in Harare was developed in the 1950s, before Zimbabwe’s independence in 1980, and designed for a population of 300,000 people.

Currently, Harare’s greater metropolitan area has about 4.5 million people, more than half of whom have no access to clean water and are at risk of water-borne diseases such as cholera and typhoid.

The water crisis in Harare has affected people’s rights to water and sanitation as well as other related rights, including the rights to life, food, and health.

“Sometimes we get city council water in the taps,” a woman from the high-density suburb of Mabvuku told Human Rights Watch.

“It is not clean. We cannot drink it and, because it smells badly, we cannot use it to cook.”

Common water sources, namely shallow wells, taps, and many boreholes – deep, narrow wells – are often contaminated, Human Rights Watch said. However, despite the known risk of contaminated water, there is no specific official information on which water sources are safe, leaving residents to take their chances.

“The water that comes out from the taps is neither clean nor safe to drink, so we have to depend on borehole water, which we feel is better,” said a 46-year-old woman from Harare’s Glen View suburb.

“But we know that even borehole water is not safe for drinking.”

More affluent families in Harare’s low-density suburbs drill safe boreholes and purchase bottled water, options not available to the vast majority of the population. The humanitarian organization Medecins Sans Frontiers (MSF, or Doctors Without Borders) in Zimbabwe has developed a method of protecting new boreholes from contamination with sanitary seals, but local governments have not adopted this solution, which costs several thousand US dollars per borehole.

Under section 77 of Zimbabwe’s 2013 Constitution, “every person has the right to safe, clean, and potable water.” The government is obligated to take reasonable legislative and other measures, within the limits of available resources, to achieve the progressive realization of the right to water. Zimbabwe is also a party to African regional and international human rights treaties that recognize the right to water and sanitation.

The government at the national and local levels should urgently act to ensure alternative sources of safe drinking water, such as safe boreholes and protected wells, for the entire population, Human Rights Watch said.

“Zimbabwean authorities should not wait for the next cholera outbreak to provide access to safe drinking water for everyone,” Mavhinga said.

“The government should invest in low-cost water equipment and distribution systems to uphold the right of millions of Zimbabweans to potable water.”

The millions of residents of Harare and the surrounding areas have been hard hit by the region’s water crisis.

In Mbare, a high-density suburb of Harare which has the country’s biggest and busiest bus terminus and a vegetable market visited by thousands of people daily, water and sanitation facilities are insufficient, residents said.

Because of the lack of water, the flush toilets are severely inadequate, unsanitary, and in many cases as a result are nonfunctional. Both Harare and Chitungwiza have numerous open markets in which thousands of people set up stalls to sell meat, vegetables, fruit, and livestock, but the markets lack adequate water and sanitation facilities.

For instance, at the Kamunhu Shopping Centre in Mabvuku, the Harare City Council established about 2,000 market stalls for traders, but it did not provide running water.

Residents who at times get tap water described the water’s quality as poor.

A 53-year-old woman from the Mabvuku high-density suburb said that: “Now we get water in our taps twice a week in the evenings, but we cannot drink that water, we only use it for washing. For drinking and cooking water, we [go to] boreholes where we wait sometimes four hours to get it.”

Those who have no access to tap water rely on boreholes for all their water. A 32-year-old mother of two in the Highfields high-density suburb said that her tap water was shut off after she failed to pay $6,000 (US$70) in water bills over six months.

Instead, tens of thousands of Epworth residents have depended on a dam with stagnant, unsafe water for more than three decades, even though the water is unfit for human consumption.

In Harare’s low-density suburbs in the north and east of the city, more affluent families have devised alternatives, including drilling safe boreholes and using bottled water, which costs $86 (US$1) for a one-liter bottle. That is unaffordable for the vast majority of Zimbabweans, many of whom live well under the poverty line.