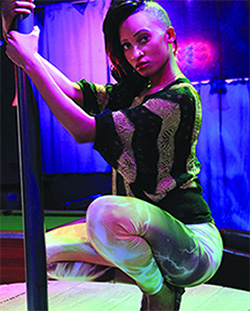 POLE dancer Beverly Sibanda has been cautioned and fined $100 following her arrest on charges of contravening the Censorship and Entertainment Act.
The Sexy Angels leader was arrested for performing erotic dances with fans at Harare’s Private Lounge Night Club last Friday as well as at the Airport Lounge on May 23.
She pleaded guilty to two counts of contravening the country’s censorship laws when she appeared before magistrate Donald Ndirowei Wednesday.
Prosecutor Francesca Mukumbiri said the fact that Harare was hosting a carnival featuring nearly nude Brazilian dancers was no justification for Bev’s conduct.
“She might say that on the Carnival Samba night she was copying the Brazilians, but your worship the accused must know that she is a Zimbabwean not a Brazilian hence should abide by the rules and laws,” said the prosecutor.
“There is no justification for her over-excitement during her shows and her excuses do not hold water.”
However, Bev’s lawyer said sending the 23 year-old to jail would adversely impact her minor child.
“Your Worship, her fans were overjoyed to see her … after her non-appearance on stage for some time and some of them were drunk and would jump on stage to welcome their queen of dance,” said Jivas Mudimu of Madotsa and Partners.
“As a mother, giving her a custodial sentence or community service will not only hamper her but the child as well since she is playing both the motherly and fatherly role.
The magistrate warned Bev that any physical contact with fans while performing would in future result in jail time.
Qounfuzed – Inini na Bev