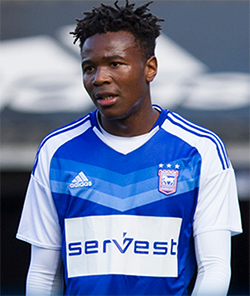 KUNDAI Benyu and his loan side Aldershot had an evening to forget Wednesday as the 19-year-old midfielder – watched by Ipswich Town boss Mick McCarthy and his assistant Terry Connor – was forced off injured during the second half of a 3-0 home defeat to Tranmere Rovers in the first leg of their Vanarama National League play-off semi-final.
The Shots were already two goals behind – the second a howler from keeper Jake Cole – before Benyu hurt a knee when making a sliding challenge.
Having briefly continued following treatment, the academy product was eventually replaced in the 63rd minute.
Aldershot, who finished fifth in the National League, 13 points behind second-placed Rovers, have a mountain to climb in the away leg at Prenton Park on Saturday with Benyu almost certainly doubt.
The central midfield player has enjoyed a hugely successful spell with the Shots, scoring five goals in 22 starts and one sub appearance since joining them in December.
Blues boss McCarthy has said the club will be taking up a one-year option on Benyu’s current contract, which was otherwise set to end this summer, and offering the midfielder a new longer-term deal.
Camden-born Benyu, who also qualifies to play for Zimbabwe, is yet to make his senior debut for the Blues but has been on the first-team bench on four occasions.Advertisement