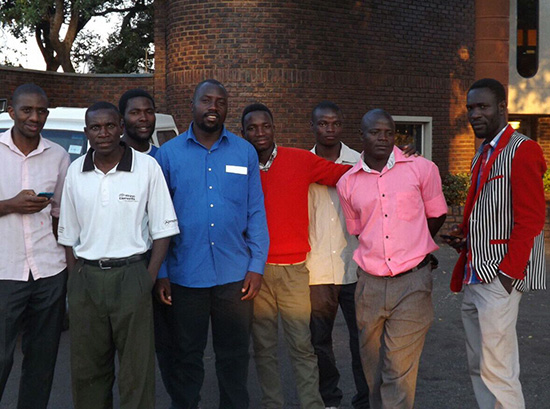 YEARS after Vabati VaJehova breached the seemingly impregnable barrier that prevented the a-capella apostolic gospel music genre from becoming mainstream, what seemed to have been a fad has died down.
The long white robes and garments have been folded away, the shakers have been silent, and the ladies have gone back to child bearing and rearing. Nothing seems to have continued the trend of ministry through apostolic music.
The big names have fragmented; the icons like Wiseman Magaya have long since passed on and the baton lies unclaimed, on the ground. Then enter Disciples Compass, which has had the gospel music charts blazing over the past few months to reclaim the lost and unclaimed title of kings of a-capella gospel.
And yet their story is rather peculiar, as is their appeal on the national charts. The new kings of apostolic a-capella are in fact foreign in a way.
“We are an all-male ensemble and our music has been very well received.
“Perhaps it is because of our little secret of whom we really are and what inspires us to take up this sort of music. It is not a genre we are familiar with in our own churches,” says the group’s leader and spokesperson David Makoni.
In fact, while the music is apostolic, the group comprises musicians from a wide array of religious backgrounds who share a love and appreciation for the apostolic faith approach to music-making and artistry.
The group has Methodists, a member of the Prophetic Healing and Deliverance church led by William Magaya, members from the other mainstream ‘conventional traditional’ churches as well as, of course, members of various apostolic faith churches.
“We share a love for the apostolic genre of music, a passion for ministering through song and also an appreciation for the art of a-capella,” confesses David.
The end result has been phenomenal.
They have taken traditional hymns and refrains from the Methodists for example and redone them with apostolic faith music flair and the people from across denominations have taken to them.
Which explains why the debut album, Hakuna Zita, has spawned several hit singles that have made them hot shot favorites to land amongst the top five gospel music players come end of the year when people run off with a number of accolades as the year is analyzed in retrospect.Advertisement

“Our music and our name are meant to tell a refreshing story. We want to be like a compass that has strengths beyond where it is. We want to reach beyond our borders and break the confines of denomination as we minister. That is why we are from various denominational backgrounds ourselves,” said Makoni.
So think of them as, perhaps, the gospel apostolic equivalent of UB40; just that they meet up not when they are broke but feel a Jeremiad urge to impart the message of the gospel and cannot contain it like the proverbial ‘fire locked up in their bones’ and then they assemble and sing.
So in effect they are apostles much like the singers in the apostolic faith churches, minus the brood of children and the harem of wives; a more purified form of the apostolic faith artiste, perhaps, one can say.
“We live by our denominational principles and sing according to the apostolic musical discipline,” says David.
The result is a virtuoso performance which has seen them win Clash of The Choirs with radio station Star FM and command a huge following courtesy of their freshman album. And the popularity has become a challenge as they craft their sophomore.
“We are now in the process of putting together a second album in response to demands from our followers and fans. The first eleven-track album got such an overwhelming response it is time we maintained the momentum,” David explained.
And, in a tribute to their late co-leader who died in a road traffic accident before completion of the first album, two tracks are distinctly dedicated to his life and passing namely Fambai Naye and Tichanosanganiswa, hence the tangible air of emotion in the tracks.
The tracks Huyai Mambo, Jesu Chiuya and title track Hakuna Zita have been the chart toppers however, signaling a new hope for a genre which had all but ceased to light up the gospel music charts after a rather shocking lull.