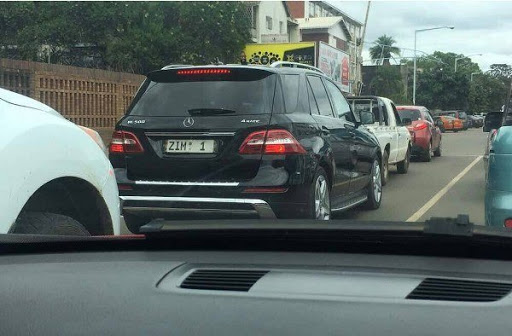 They also face a separate charge of assaulting a police officer, Clemence Mande.

According to the state, the trio was driving in an unregistered Honda CRV vehicle before parking it opposite OK Supermarket along E.D Mnangagwa Road.

Mande then approached the trio and ordered it to drive off since it was obstructing the presidential motorcade, which was fast approaching.

Mnangagwa was travelling from Gweru where he had capped Midlands State University graduands and was on his way to his Sherwood farm just outside Kwekwe.

However, the three men refused to drive off telling the police officer they were also senior officials.

“Tinotoriwo mashefu,” they told the cop in Shona (We are also senior officials), according to state papers.

The police officer then tried to arrest them, but the men resisted and a scuffle ensued between Mande and the trio.

According to the State, Nago pushed and assaulted Mande on the back of the neck while Zibako manhandled the cop and grabbed him by his belt and Diura poked Mande on the forehead.

The men tried to force Mande into their vehicle but he resisted before they sped off while other vehicles were already stationary obeying strict orders from Mnangagwa’s advanced security team.

“Accused (Diura) drove his vehicle namely a Honda CRV which is unregistered along E.D Mnangagwa Road, Kwekwe CBD and drove north up to Senderayi Roundabout Kwekwe, he then drove along Kwekwe Industrial Road where he proceeded against a red robot (sic),” the state told the court.

In the process, the trio bumped into Mnangagwa’s escort team riding on motorbikes that had already sealed off the E.D Mnangagwa Road for Mnangagwa’s motorcade to pass smoothly.

Two of the presidential motorbikes gave chase and caught up with the three men along Industrial Road leading to their arrest before they were brought to the court Saturday.

They were each granted bail of $2000 and will be back in court on 9 December.

Mugabe is currently fighting to contest the poll again in the coming parliamentary by-election following the death of Matambanadzo a few months ago.

Last month, police had to be called in and were forced to fire warning shots after a primary election pitting both Mugabe and Ncube turned bloody following heavy clashes between the two rival groups. The violence took place at the party’s Kwekwe district offices.

The primary election was later aborted but campaigning continues as party supporters wait for a confirmation date on when a fresh nomination process will be conducted.

Other Zanu PF political heavyweights in the Midlands province have also joined in the factional fight leaving the party deeply divided.