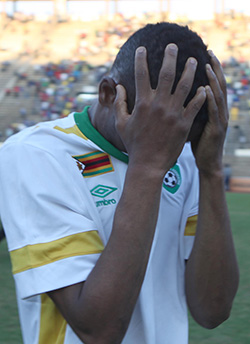 ZIMBABWE 2-2 TANZANIA
(Tanzania won 3-2 on aggregate)
ZIMBABWE’S senior national football team has crashed out of the 2015 Africa Cup of Nations qualifiers on Sunday.
The Warriros are out after a dreadful 2-2 home draw against continental minnows Tanzania in the first round, second leg of the qualifiers, played before a packed National Sports Stadium.
Angry fans hurled missiles as the players went down the tunnel at the end of the match as they could not stomach the misery.
This means the Warriors would have to now wait up to 2016 to try their luck again in the continental championships to be staged in Libya 2017.
Again the Warriors will have to scale the mountain from the same preliminary stage which saw them lose to Tanzania.