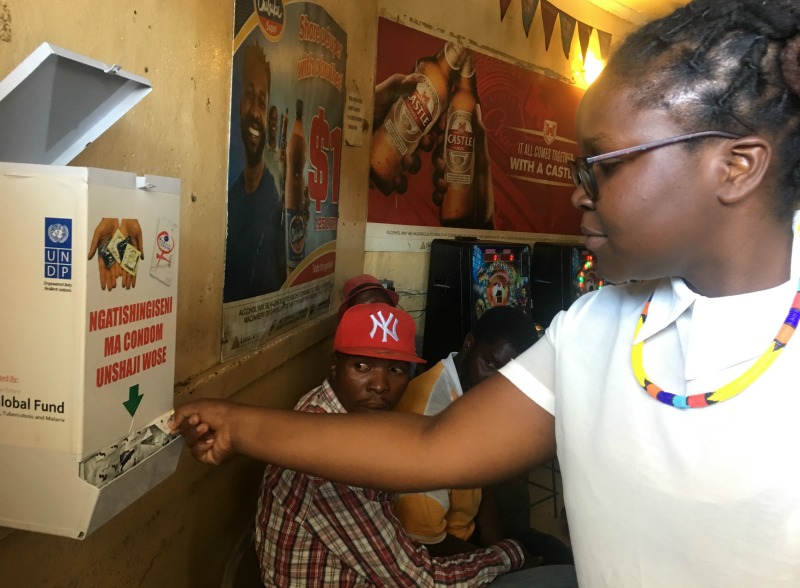 The dispensers are found in clinics, beer taverns, tertiary institutions and truck inns.

The two-week old pilot project is found at Chivi turn-off, Mpandawana and Chivi growth points as well as Masvingo Polytechnic College which often runs out of the contraceptive, moments after dispensers are loaded with the life-saving rubber.

Depending on the size of the dispensers, each one carries an average of 600 and 4 000 condoms.

Both male and female condoms are accessible for free although there is a low uptake of the female contraceptive, it has been said.

“We decided to take it to places where sexual activity is very high,” Gutu District Aids coordinator Pask Mukuwe told journalists during a recent NAC sponsored tour to the area.

“We will be replenishing them from time to time to keep up with the demand.”

“We have installed condom dispensers at Chivi turn off and Chivi growth points which are hot spots of the district because of high movement of trucks along the highway,” said Mashingaidze.

“Highway corridors are the biggest hotspots and we are targeting these in our programming to ensure condom uptake increases so as to prevent new infections or re-infections.

“We hope the condoms are being used as evidenced by the demand.”

Moses Jenje, a Gutu resident urged NAC to maintain its condom supplies as other people, and in particular, sex workers are grabbing all of the condoms from the dispensers as soon as they are replenished.

“Condom dispensers are a good idea but they are quickly running out as sex workers hoard them,” said Moses.

“And when there are no condoms in the dispensers, the sex workers and some men will be selling them in here, right here and that’s unfair.

“It should be a crime for one to be found selling the free condoms they would have taken from the dispensers.”