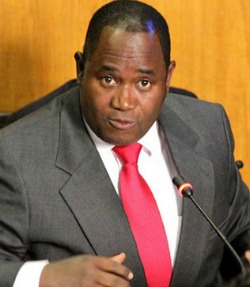 PRESIDENT Robert Mugabe’s apparent landslide election victory has prompted fears that the country’s barely resuscitated economy is in for another bumpy ride.
The full results are not yet in, but Mugabe’s triumphant allies have already vowed to redouble efforts to put assets into the hands of black Zimbabweans.
“All resources must be for the benefit of our own people. We will no longer tolerate any exploitative relationship,” Justice Minister Patrick Chinamasa said.
“We are going to continue with our message that our resources must come under the control of the people of Zimbabwe.”
After land and mining grabs, Chinamasa has already singled out the country’s foreign-owned banks as targets for indigenization.
“All the banks are British owned, that is why they are refusing to give credit to our people,” he said.
In recent years Mugabe’s Zanu PF hardliners have talked a lot about seizing financial firms like Britain’s Standard Chartered and Barclays.
There have even been threats against South African firms like Standard Bank – despite the risk of irking a powerful neighbour.
But generally cooler heads have prevailed.
“Destabilizing a large bank such as Standard Chartered has serious systemic consequences that can lead to unintended results,” Zimbabwe’s central bank chief and Mugabe ally Gideon Gono said in April.
But the scale of Mugabe’s supposed victory may give the hardliners the upper hand.
And some analysts believe Mugabe, already 89 years old and trying to keep successors at bay, may have little choice but to expropriate assets and divvy up the spoils.
“The only way for Zanu PF to maintain the loyalty of the armed forces and of its supporting structure is to find ways of extracting resources,” said Jakkie Cilliers, director of South Africa’s Institute for Security Studies.
Investors are bracing for the worst.
“It’s back to extreme volatility,” said Iraj Abedian, CEO of Pan African Investments.
“We can expect fairly radical positions that will have populist support, but which will have huge implications.”
“The land grabs caused chaos in the agricultural sector and it took ten years for it to settle down,” said Abedian.
“The financial sector would have a similar impact. It would cause chaos, but Zanu PF and Mugabe seem to like that.”
During the last decade Mugabe, once an avowed Marxist, has seized white owned farms and demanded majority ownership of foreign owned mines.Advertisement

Critics and supporters have argued over whether the farm seizures have successfully redressed colonial imbalances, or just put assets in the hands of Mugabe’s cronies.
Before the measures, 6,000 white commercial farmers owned roughly 45 percent of the land, including the most arable.
After half the white farmers were – often violently – kicked off, the cereal harvest shrank by 60 percent and overall agricultural production fell by 25 percent.
Studies since then have pointed to a less bleak picture.
In 2010, Britain’s Institute of Development Studies reported 160,000 households had gained land and smaller farmers were generating surpluses.
But the broader economic impact was devastating.
Aid dried up amid rights abuses and investor confidence evaporated as quickly as cash left the country.
In 2003, Samantha Power, recently appointed US ambassador to the UN, said Mugabe had turned “a breadbasket into a basket case in ten easy steps.”
Shop shelves were empty, which did not really matter, because more than 90 percent of Zimbabweans were out of work and could not afford steep prices.
For those with a job and income, inflation made goods unaffordable anyway.
The official annual inflation rate hit 231 million percent, before the central bank stopped counting.
According to one private study, the real rate topped out at 79 billion percent, per month.
There were riots, strikes and in the decade until 2008, output declined every year and the economy shrank by 45 percent.
By 2005, the purchasing power of the average Zimbabwean fell to 1953 levels, according to UN figures.
Things began to improve when Mugabe was forced into a power-sharing deal with Prime Minister Morgan Tsvangirai.
The coalition government also inspired some confidence in investors as did a decision to adopt the US dollar.
According to the Zimbabwe Investment Authority, foreign direct investment increased six-fold between 2008 and 2011.
In roughly the same period, GDP grew 20 percent, according to the World Bank, although that figure was padded by earnings from minerals, particularly diamonds.
The state budget remains in a critical condition, unemployment painfully high and recovery fragile, but the trend is in the right direction.
Investors fear it may not remain that way for long.