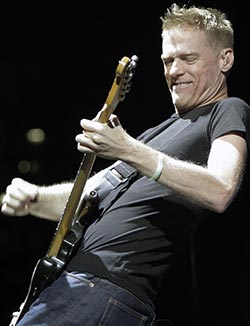 IT’S the biggest event to hit Zimbabwe in years. Within 10 hours of the announcement that Bryan Adams would be performing in Harare, every ticket was sold out – and at prices that most ordinary Zimbabweans could never afford.
The concert on Friday by the Canadian rock singer – the highest-profile Western star to visit the impoverished country for many years – is being welcomed eagerly by many Zimbabweans who yearn for an end to their long isolation on the world stage.
But some worry that it could also give legitimacy to Robert Mugabe, the autocratic President who has ruled the country for the past 34 years. The Canadian government is among those who might be less than happy with the Adams concert, though it has said little publicly.
Last year, it boycotted a United Nations tourism conference in Zimbabwe, after questioning Mugabe’s latest claim of election victory. It has expressed “profound concerns” over human-rights violations in Zimbabwe and it has maintained sanctions on Mr. Mugabe and his inner circle despite the election results.
Some of Mugabe’s critics in Zimbabwe’s media and political circles are concerned that the Adams visit could give “comfort” to the Mugabe government. But the star’s handlers are dismissing the criticism.
“Bryan is an international artist with a worldwide audience, whether it is Pakistan or Vietnam or Zimbabwe,” said Bruce Allen, the long-time manager of the Canadian star, in an e-mail on Monday.
“To paraphrase what he has said over the course of his 30-plus year career, ‘Everywhere he goes, kids wanna rock.’ Music will, I hope, always remain a universal language.”
The latest Adams world tour was scheduled to arrive in South Africa this month, and his Zimbabwe show was added for Friday, a day before his first South African gig. All of the nearly 3,500 tickets at the Harare International Conference Centre were quickly snapped up, at prices ranging from $30 to $100.
“Zimbabweans have a real hunger for contact with the outside world,” said Petina Gappah, a Zimbabwean novelist.
International attempts to impose sanctions on the Mugabe government are failing, she said. “Isolation has not worked. I think engagement is the way to go.”
In fact, some governments – including the European Union – have reduced their sanctions on Zimbabwe in recent years.
“There’s been a creeping normalization of relations,” said Brian Raftopoulos, a leading analyst of Zimbabwean politics. “There’s a slow movement toward re-engagement with Mugabe and his government.”Advertisement

But some Zimbabweans are outraged by the Adams concert. “He’s creating a false comfort zone,” said Vince Musewe, a newspaper columnist who believes the election last year was rigged.
“It’s inappropriate, and it’s not going to help. He could have contributed to transformation by refusing to perform. High-profile people should refuse to go to African countries where ordinary people are fighting their rulers.”
At a time of widespread poverty and unemployment in Zimbabwe, the Adams concert will only benefit the country’s elite, he said.
He compared it to a performance in Angola by American singer Mariah Carey, who was reportedly paid $1-million to perform for Angola’s authoritarian leader, José Eduardo dos Santos.
David Coltart, a human-rights lawyer and opposition leader who served as minister of education, arts and culture in a coalition cabinet in Zimbabwe from 2009 until last year, said he is “of two minds” about the Adams concert.
“On the one hand, it is good that he has come because that opens up political space, but I hope he comes with his eyes open and does not take a superficial view of what is going on,” he said. “There is no doubt that this will be a concert mainly attended by the elite.”
In the past, the Zimbabwean government has brought singers to Harare as “celebrity hosts” to promote tourism, but most were lesser-known performers, including Jamaican reggae singers.
On Monday, in response to the Bryan Adams concert, a spokesman for Foreign Affairs Minister John Baird said: “We will continue to work with the people of Zimbabwe to foster a more peaceful, democratic and prosperous future for all, one that respects the fundamental human rights of the Zimbabwean people. We hope that would be the goal for all those visiting Zimbabwe.”