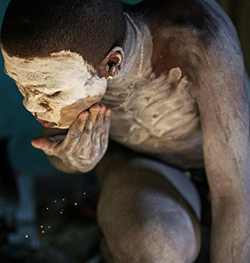 SOUTH Africa: A coming-of-age film which explores the taboos around gay love and sex has won plaudits and awards abroad, and is now in the running for an Oscar.
But back home in South Africa, the movie is under fire for lifting the veil on secret initiation rites practised by one of the country’s largest ethnic groups.
The trailer alone led to its stars receiving death threats, and opponents have fought to stop it from being screened in local cinemas.
“The Wound” delves into the world of ritual initiations in the country’s Xhosa community, following the experiences of an initiate and two older men who all experience same-sex attraction.
Acclaimed by critics, the film was last week short-listed for the “best foreign language film” category for the Academy Awards, the winners of which will be announced in Hollywood in March.
But the boost to its international profile has enraged many in the Xhosa community which the drama attempts to portray.
“It’s a daring film, it’s a brave film. All of us took a bold decision,” said actor Niza Jay, 22.
“This story had to be told. The kind of Xhosa characters depicted in the film, they exist — it’s people I know.”
Jay plays Kwanda, a young gay man from Johannesburg whose father dispatches him to the mountains of the Eastern Cape to take part in the “Ulwaluko” — the Xhosa initiation into manhood.
– ‘Not simply a gay love story’ –
While there he meets Xolani (Nakhane Toure), a quiet, closeted gay man who is charged with looking after him.
The plot twists when Kwanda discovers not just Xolani’s orientation but that he has a secret sexual relationship with a senior initiation leader who is a violent alcoholic — and a married father.
“It’s not simply this gay love story set in the mountain,” Jay told AFP in a Johannesburg cafe, wearing hair extensions and high-heels.
“It’s an exploration of way more than just the ritual — or gayness — it’s an exploration of respectability politics, seniority, manhood, masculinity.”
The film also depicts the circumcision process and the often basic after-care given to initiates.
“The Ulwaluko is a very sacred and very important ritual for Xhosa people, my people. It’s an environment where you learn your place among men and within your culture,” said Jay, who is himself Xhosa — like Nelson Mandela.Advertisement