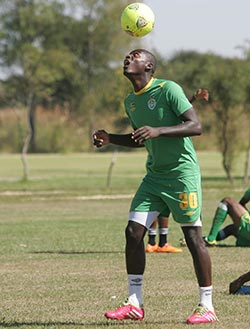 WARRIORS coach Ian Gorowa dropped Highlanders goalkeeper Munyaradzi Diya for Sunday’s 2015 Orange Africa Cup of Nations first round, first leg qualifier against Tanzania at the National Stadium in Dar es Salaam.
There were only 19 players in camp and the former Bosso number one was the unlucky man as Gorowa opted to travel with 18 players.
Diya has been on the bench for Bosso’s last two league matches against Caps United, whom they whacked 4-0 and the last Sunday’s 0-0 draw against ZPC Kariba in Harare with coach Kelvin Kaindu preferring Arial Sibanda.
The Warriors trained at Gateway High School in Harare on Friday morning before leaving for Addis Ababa, Ethiopia at 1400hrs where they were expected to connect to Dar es Salaam later in the evening.
Centreback Eric Chipeta sat out Friday morning’s one hour workout due to a knock, but team doctor Nick Munyonga and Gorowa said it was just a precautionary measure, insisting there was nothing serious.
Chipeta is expected to partner skipper Patson Jaure in the heart of the defence with Milton Ncube and Hardlife Zvirekwi occupying the wing backs.
Danny ‘Deco’ Phiri and Stephen Alimenda will anchor with Kuda Mahachi and Pascal Manhanga, although Peter Moyo, could still come in in the creative hub.