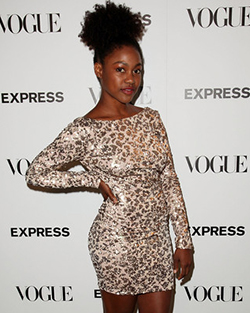 AFRICAN-AMERICAN actress Daniele Watts was “accosted and forced into handcuffs” by LA police who allegedly mistook her for a prostitute.
The Django Unchained star said she was approached and asked for her ID by two police officers in Los Angeles after kissing her white husband, Brian James Lucas.
When Watts refused, she was handcuffed and placed in the back of their police car.
According to Watts and Lucas’ joint Facebook pages, the actress was talking on her mobile phone to her father when she was approached by a police officer.
When she refused, the police placed her in the back of their squad car while they checked her identity.
A distraught and angry Watts wrote: “Today I was handcuffed and detained by two police officers from the Studio City Police Department after refusing to agree that I had done something wrong by showing affection, fully clothed, in a public place.
“When the officer arrived, I was standing on the sidewalk by a tree. I was talking to my father on my cell phone. I knew that I had done nothing wrong, that I wasn’t harming anyone, so I walked away.
“A few minutes later, I was still talking to my dad when two different police officers accosted me and forced me into handcuffs.”