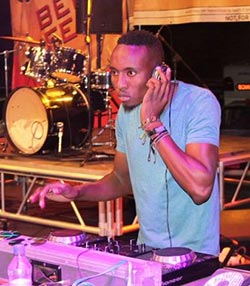 BULAWAYO-BASED tribal house quartet, Djembe Monks, have been appointed one of the ten brand ambassadors of this year’s edition of Shoko Festival.
Some of the brand ambassadors include comedian Clive Chigubu, musicians Tehn Diamond, Hope Masike, Ammara Brown, Ba Shupi, Dadza D and Disc Jockeys Jason le Roux and Raydizz.
Completing the list is social media activist, Sir Nige.
This year, the festival runs between September 25 and 28, 2014.
In an interview with NewZimbabwe.com, Djembe Monks administrator Emmanuel ‘RootzKolossal’ Nkomo said they felt honoured to be appointed ambassadors of the fast growing arts festival.
“We feel humbled and honoured to be chosen and given the opportunity to be one of the many faces of the festival.
“We are grateful that our work has caught the eye of the festival of such magnitude as Shoko. We will use our music and image to market and promote the festival here in Bulawayo,” said Nkomo.
“We look forward to learning a lot about talent liberation, as we will be looking at discovering new forms of art and working with fellow young artistes.”
He added: “We want to get as many people as possible to know about Shoko festival. Maybe one day Magamba Network can bring a special edition of the festival to Bulawayo and help rejuvenate the arts and culture scene in the city.
“Artistes have to take their craft seriously like any other job and this involves giving people value for their money and the artistes themselves using their art to invest in themselves and rise above this talk of marginalisation and perfect their work until it is hard to ignore.”
Nkomo said that they also want to take advantage of this role to grow and market their own brand.
The Djembe Monks – Refugees