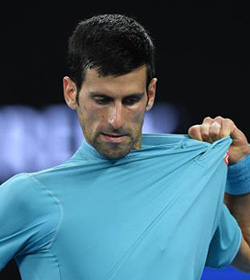 NOVAK Djokovic suffered arguably the biggest defeat of his career when he crashed out of the Australian Open to 117th-ranked Uzbek Denis Istomin on Thursday, extending his mystifying slump in form.
With Istomin inspired, the defending champion sent down 72 unforced errors as he lost 7-6 (10/8), 5-7, 2-6, 7-6 (7/5), 6-4 in the second round to end his bid for a record seventh title at Melbourne Park.
Later, Rafael Nadal beat Marcos Baghdatis and in the women’s draw, Serena Williams ousted Lucie Safarova 6-3, 6-4. But third seed Agnieszka Radwanska was a major casualty when she lost 6-3, 6-2 to Croatian veteran Mirjana Lucic-Baroni.
It is more than a decade since Djokovic made such an early exit from the Australian Open, and he hasn’t lost in the second round of any Grand Slam since Wimbledon in 2008.
Djokovic had only been defeated by a player outside the top 100 once in the past seven years, when he went down to 145-ranked Juan Martin del Potro at the Rio Olympics.
The stunning result blows the men’s competition wide open as the six-time champion was widely expected to reach the January 29 final, where he was seeded to meet five-time runner-up Andy Murray.
It also raises fresh questions for the world No 2, who has been in a funk since completing a career Grand Slam and winning his 12th major title at last year’s French Open.
“It’s one of these days when you don’t feel that great on the court, don’t have much rhythm, and the player you’re playing against is feeling the ball very well,” he shrugged.
“That’s sport.”
MOTHER’S LOVE
While Djokovic was rocked by the defeat, there was joy for Istomin, who is coached by his mother and has never got beyond the third round in 11 visits to Melbourne Park.
“I feel sorry for Novak, I was playing so good today,” he said. “I surprised myself also.”
One beneficiary of Istomin’s win could be world No 3 Milos Raonic, who was seeded to meet Djokovic in the semifinals.
Despite suffering from ‘flu, the Canadian strode into the third round with 6-3, 6-4, 7-6 (7/4) demolition of Gilles Muller and will next play France’s Gilles Simon.
Croatia’s Ivo Karlovic made a miraculous recovery from his record-breaking 84-game win over Horacio Zeballos two days earlier to beat Australian wildcard Andrew Whittington.Advertisement

The 6ft 11ins (2.11m) Karlovic, who fired 75 aces as he beat Zeballos 22-20 in the fifth set on Tuesday, won 6-4, 6-4, 6-4 to set up an encounter with Belgium’s David Goffin.
Grigor Dimitrov, a winner this month in Sydney, beat South Korea’s Chung Hye-On in four sets to go into a testing clash with Frenchman Richard Gasquet.
Nadal, attempting to improve on an injury-riddled 2016, swamped former finalist Baghdatis 6-3, 6-1, 6-3 and next plays top-rated German teen Alexander Zverev.
Radwanska was the strong favourite against Lucic-Baroni, 34, but the Pole’s famous shot-making deserted her as she succumbed to her earliest exit since 2009.
Britain’s Johanna Konta kept up her hot run of form as she beat Japan’s Naomi Osaka 6-4, 6-2 to set up a meeting with former world No 1 Caroline Wozniacki.
US Open finalist Karolina Pliskova ousted Russian qualifier Anna Blinkova to stay unbeaten this year, and WTA Finals winner Dominika Cibulkova saw off Taiwan’s Hsieh Su-Wei.
Second-seeded Williams, seeking a record 23rd major title, will face fellow American Nicole Gibbs in the third round after her high-level victory over Safarova.
Meanwhile Australia’s Nick Kyrgios, much-criticised for his lacklustre defeat to Italy’s Andreas Seppi late on Wednesday, was fined $5 500 for an audible obscenity and racquet abuse.
The temperamental Aussie, accused by tennis legend John McEnroe of giving up during the match, also pulled out of the men’s doubles competition citing an abdominal injury.