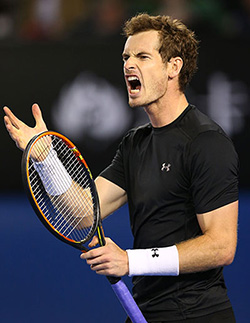 NOVAK Djokovic crushed Andy Murray in the final stages to claim the Australian Open men’s singles title 7-6 6-7 6-3 6-0.
Murray had seemed on the front foot as he won the second set to level the match, then broke early in the third set to lead 2-0.
But Djokovic then won 12 of the next 13 games to enjoy an extraordinary victory – and consign Murray to a fourth defeat in the final in Melbourne.
The Serbian superstar, by contrast, has a perfect five-out-of-five record in Australian Open finals – and fully justified his world number one status as he roared away with the match.
The Serb also spared a thought for his opponent at the end of the match.
“I want to congratulate Andy for a great tournament…. Tough luck tonight. You are a great competitor.
“You fight a lot, and I want to congratulate your team and wish you all the best in the rest of the season.”
To the surprise and delight of the crowd he then turned things personal: “I will also congratulate you and Kim on your engagement, and I wish you a wonderful wedding…. I wish you many kids!”
Murray kept calm in his speech, thanking the fans and his team behind the scenes: “Unfortunately we couldn’t get it but I’m a little bit closer than I was a few months ago.
“I will try to come back next year, and hopefully have a slightly different outcome in the final.”
Murray also congratulated his opponent, praising his “incredible record, and thoroughly deserved.”

Up to his old tricks? … Doctors attend to Djokovic