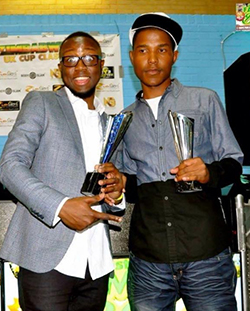 THIS year’s 10th edition of the Zim-UK Cup Clash 2015 saw two DJs walking away with £500 each and floating trophies at the competition at the weekend.
Kwekwe bred DJ Fydale whose real name is Fidelis Isaac (also reigning Southern African Cup Clash) champion won in the Dancehall section where he represented Black Identity Sounds.
UK based DJ Principal real name Tinashe Mugomezi of Ace Entertainment got the top honours in the Afrobeats clash.
In an interview, DJ Fydale said that despite the stiff competition he was confident that his midas touch would out-smart his competitors.
“I just feel great and that everything I touch in music turns to gold. It was a stiff competition but I worked hard kuti zviite,” he said.
DJ Principal was elated to be a winner of the Afrobeats genre.
“I am happy to win the AFROBEATS Cup Clash this year. It is one of the biggest Zim events in the UK and I was happy to be on stage with other great Djs.
“I enjoyed every moment and big shout to Ace Ent and Team. I Love those who made the Clash a huge success this year,” he said.
King Alfred, who popularized this annual cup clash, said, “We thank the almighty God for last. It was a remarkable 10th year anniversary. Big shout to all those who came to witness Zim Cup Clash UK 2015.Big Turn Out !!!
“Big shout to the winners Dj Fidel aka and Deejay Principal .Maximum respect to our Compere Etherton Beenie & DjFlevah Tendai,” he said on his Facebook page.
At the competition, the dancehall genre featured DJ Envy, DJ Fydale and Dancehall Defenda.
Competing in the Afrobeats section were Team 1Love (Silvaa King and Crew), Ace Entertainment and DJ Principal.
The Judgement Yard team of DJ Flevah and Etherton Beenie were the judges.Advertisement