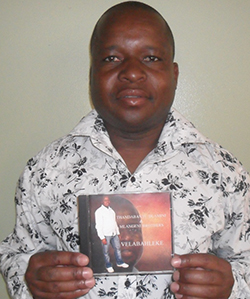 BULAWAYO musician, Thandabantu Dlamini, has released a scintillating six track album which is likely to get a frenzied reception from fans during the coming festive season.
Entitled Velabahleke (Let them laugh), the album has also rocked the local airwaves and was recorded at Grammar Records in Harare.
The album opens up with the title track Velabahleke which talks about Dlamini’s detractors.
Velabahleke is followed by the song Zim Asset which urges Zimbabweans to embrace and rally behind the government’s economic blueprint, the Zimbabwe Agenda for Sustainable Socio-Economic Transformation (ZimAsset).
Another pick from the album, Ingozi Zemgwaqweni (Road Accidents), urges drivers to be extra careful when driving especially during the coming festive and rainy season.
“Ingozi Zemgwaqweni has got a very important message for all drivers,” said Dlamini.
“I composed this song after realising that accidents in this country continue to take the lives of innocent people.
“The message in this song resonates very well with the festive season which is associated with merry-making mood.”
Other songs on the album include Bahlephunele Mbijana, Support and Idlozi Lobuyanga.
Dlamini, who is the leader of the five-member band, Mlangeni Brothers, started his musical career in the late 90s.
He produced his debutant album, Simon Peter, in 2003. Some of the albums which followed Simon Peter include Insikabayitshiye, Avocado and fireguard.
However, the new album has already fallen victim to piracy.
“Piracy has really affected our music big time. A few days after the album was released, the music was already being sold on streets by vendors.
“We are being deprived of a lot of revenue through this illegal practice,” said Dlamini.Advertisement