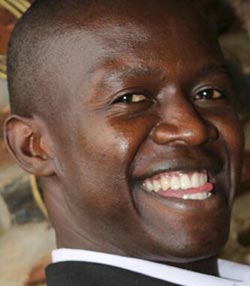 CELEBRATED local stand-up comedian Victor ‘Doc Vikela’ Mpofu took his act to South Africa with a performance in South Africa last Friday.
The comedian who arrived in Cape Town on Wednesday was set to perform at the Jou Ma Se Comedy Club on Friday before heading to Armchair Theatre on February 2.
Doc Vikela said he is thrilled to be performing in South Africa for the first time.
“I am very happy to be performing in front of a different audience than what I am used to. It is a challenge I feel I need as I continue to grow as a performer,” he said.
“I am here to make people laugh and God help me if I do not do just that. I promise my fans a great laugh.
“I am ready and raring to go so Cape Town should brace for a taste of Zimbabwean comedy like they have never seen it before; Zimbabwean comedy to the world.”
Meanwhile, his publicist Shanee Banda said the comedian will also be representing the local fashion industry.
“Doc Vikela is being dressed Kay Seven CL, the same fashion design house that will also be dressing him for the whole year.
“So he goes to South Africa not only representing local comedy but also our fashion industry,” she said.
Doc Vikela is a comedian who rose through the Book Café Open Mic sessions in 2011 before co-founding the first comedy night, Simuka Comedy a platform that marked the establishment of the local comedy industry.
In 2012 he won the Most Improved Comedian Award from the Zimbabwe Germany Society and is currently ranked among the best in Zimbabwe.
Doc Vikela is one of the founders of the Simuka Comedy revolution that has virtually revived the genre in Zimbabwe transforming the music infested nightlife of Harare.Advertisement