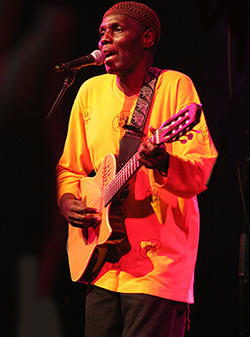 CELEBRATED musician and arguably the face of Zimbabwean arts and philanthropy Oliver Rudaviro Mtukudzi will on Friday be conferred with an honorary doctorate which, in effect, will see him being addressed as Doctor Oliver Mtukudzi.
The doctorate, conferred by the International Institute of Philanthropy will be an Honorary Doctorate in Human Letters (DHL), the third honorary degree of Oliver’s career.
“Dr Tuku” will be honoured for his sterling work in the arts industry where he has played midwife to the careers of countless notable names while his selfless exploits have gone beyond to encompass humanitarian work in several spheres of life.
Tuku has championed peace and development as shown in his UN at Fifty campaign, with the song Ngoromera (Hatidi Hondo) off his Bvuma-Tolerance album showing his commitment to peace.
Added to that, he has worked in campaigns to fight malaria, converting his song Chimusoro from a social commentary on fun to a sword fashioned to fight the disease. Work in combatting diabetes is another feather in his cap.
Evidently, that hard work, selflessness, energy and tireless dedication has now been noted and duly rewarded.
In a statement, the International Institute of Philanthropy Zimbabwe chapter representative Dr Enrico Sibanda said the award was long overdue for the towering beacon of Zimbabwean arts and culture.
“Look at what he has done for Zimbabwe. He is respected locally, regionally and internationally,” said Sibanda.
“He has mentored many musicians and has gone through so much to be where he is today. People should stop calling this man ‘Oliver’. It’s high time he was called Dr. Mtukudzi.”

“Indeed mudhara Oliver has accepted the doctorate and all things are on course for us to attend the event. We are deeply humbled by the offer and so is mudhara Oliver himself,” confirmed an insider in Oliver Mtukudzi’s Pakare Paye arts empire who preferred not to be named.
This will be Mtukudzi’s third honorary degree after an Honorary Arts degree from the University of Zimbabwe conferred in 2003 after which the Women’s University in Africa awarded him a M.Sc. Fine Arts Degree in 2009, citing him as ‘arguably the most powerful creative force to emerge from Zimbabwe in the last three decades.’