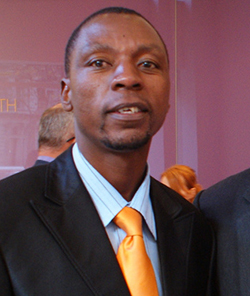 LAST week, Primary and Secondary Education Minister Lazarus Dokora, true to form, sent the nation agog when he, with a straight face, said it was now possible for parents to drag their goats and other livestock to school and pay fees for their children.
Upon noticing that he had sent the nation into wild derision, he sought to revise his statement, saying he simply meant parents could sell their livestock and use the proceeds to pay fees. The problem is we had all heard him well in the first instance and no amount of claw-back antics could save him from exposing the true calibre of President Robert Mugabe’s Cabinet.
Dokora is no stranger to needless controversy. He first became unpopular in his Ministry for banning incentives and recently caused havoc by radically, and in a wholesale manner, foisting a new curriculum on the education sector without prior consultation with stakeholders, in the process bastardizing an otherwise glorious revolution!
The Education Ministry in this country has been an unfortunate haven for comedians. One of Dokora’s predecessors, one Aeneas Chigwedere, now facing allegations of witchcraft, wanted teachers to wear school uniforms. Their Higher Education and Technology counterparts have not been spared these funny antics either; what with a whole Professor in charge of the Ministry using education and training funds to buy bicycles for chiefs and headmen and to sink boreholes in his parliamentary constituency of Tsholotsho.
Yes, the good Professor has also allegedly “stemitized” graft and avarice in a corruption case that is now before the courts and the country’s Anti-Corruption Commission.
But it is the goatee-bearded Dokora’s latest thespian frolics that have sent a desperate nation into wild delirium, with livestock-for-fees jokes providing the much-needed comic relief to a despondent nation.
Yes, most of us went to school with proceeds of livestock sales but the cattle, goats and hens were not literally taken to school for a direct barter-trade, as Dokora initially suggested in a story published in the State-owned media. Of course, he later sanitized the version into a more acceptable script after initially stunning the country by sneaking in a new goat currency through the back-door, in the process usurping the fiscal and monetary responsibilities of the Minister of Finance and the central bank.Advertisement

Apart from dragging the country into the Stone Age by resurrecting barter trade, Dokora’s warped logic would have unwittingly turned Paddy Zhanda, the Deputy Minister of Agriculture (responsible for livestock), into a Treasury chief, overseeing the minting of our new national currency through sexual reproduction by our animals! Any policy on livestock would have become a monetary policy of sorts!
The fact is that Zimbabweans have enough troubles to afford this needless comedy from the cockpit of the State. Cabinet Ministers are supposed to invoke national veneration as sober characters entrusted with crafting serious policies that can extricate the country from this quagmire. This is certainly no time for the comic antics that Dokora sought to give us.
There is a palpable and tragic lack of seriousness in the echelons of power; among the men and women at the helm of this our country which is galloping towards the precipice. It is not long ago that several government Ministers, with the authority of Cabinet itself, believed the woman they called “a beautiful traditional healer” in Chinhoyi who had spun them a yarn that pure diesel could ooze out of a rock.
The sight of barefoot Cabinet Ministers murmuring incantations before a traditional healer in anticipation that the precious liquid would leach out of a rock will forever remain an indictment on this country and the laughable cultivar of its leaders.
That in this brave 21st century – in the digital age of Twitter and Instagram – Cabinet Ministers could encourage barter trade, buy bicycles for village heads with education funds or believe that diesel can trickle out of pebbles are the kinds of stories that continue to make Zimbabwe the laughing stock of the world.
And as if that is not enough, the party in government plans to field a 94-year old as a Presidential candidate to serve another five years in office as Head of State and government, Commander-in-Chief of the Defence Forces, Chancellor of all Universities and Superior Principal of all our Technical colleges!
We sure are working tenaciously as a nation to worm our way into the Guinness book of records for breaking many a comic first.
We hear Minister Dokora received his education in Canada but his latest boob may yet warrant an investigation into his Doctorate to find out whether it is not one of those now readily available on the black market (remubhero).
Traditionally in our Zimbabwean culture, such not-so-serious men as our revered Minister of Education were not fit to join the discussions among the men gathered at the village court. Surely, how could a serious character want us to barter-trade our goats for school fees in this brave 21st century?
In true Shona tradition, the village elders, upon realizing valuable contributions are not his forte, would have respectfully sent Dokora to the easier task of skinning a goat (no pun intended)!
Given such mediocrity, we certainly deserve to make a wise electoral choice in 2018. It is now clear we need new hands on the deck, among them those for whom the testimony of their delivery during our inclusive government arrangement is there for all to see. Yes, their record speaks for itself.
And the gathering grand coalition of clouds on the horizon may yet mean more rain and a bountiful political season for the weather-beaten people of Zimbabwe.
Yes, to the positive seismic shift in our politics and the coming plentiful rains that we sure want to beat us. Welcome to the imminent change that awaits us in 2018.
Luke Tamborinyoka is the Presidential Spokesperson and Director of Communications in the MDC led by Morgan Tsvangirai. He writes here in his personal capacity. You can interact with him on Facebook and Twitter.