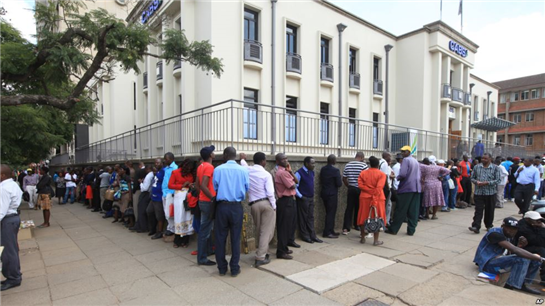 The queue outside the Harare branch of CABS bank stretches to at least 60 people, as Zimbabweans wait patiently to withdraw cash amid a deepening US dollar shortage in the country.
If they are lucky, the cash machine will have notes — many do not and availability can vary depending on the time of day.
In nearby shops, retailers warn that the scarcity of dollars — the dominant currency in the import-dependent nation — will soon start to show on supermarket shelves. Authorities this week imposed restrictions on imports of a range of goods, from bottled water to fertilisers and canned beans, while local businesses complain of not being able to pay suppliers.
The currency crisis is indicative of the dire state of the economy under the regime of President Robert Mugabe. The country is desperate to reopen credit lines with the International Monetary Fund (IMF) and the World Bank.
The government had promised to address the dollar shortage by printing so-called bond notes — effectively currency notes — that are supposed to have the same value as the greenback. The announcement in May effectively meant Harare was reintroducing its own currency seven years after it ditched the Zimbabwe dollar at a time when the country was gripped by record levels of hyperinflation.
But in the weeks since, a series of confusing and contradictory statements by officials, coupled with concern that the government’s intention is to use backdoor methods to reintroduce the Zimbabwe dollar, has merely compounded economic uncertainty.
“It is a spectacular own goal,” says one banker who did not want to be named.
Zimbabwe’s central bank originally said it would introduce up to $200m of bond notes backed by a loan from the African Export-Import Bank starting from July. But their introduction has been delayed twice, and the central bank says that only $2m of the notes will be in circulation by the end of the year.
“We are in classic headless chicken territory,” another banker says.
Zimbabwe has used a multi-currency system since 2009 after dumping the Zimbabwe dollar in the wake of a period of economic chaos during which the central bank issued Z$100-trillion notes that lost value almost as soon as they were printed.
The US dollar has dominated since then, accounting for more than 90% of transactions. The rand accounts for about 5% of transactions.Advertisement

But the depressed state of the economy that has been hit by political uncertainty, including over who will succeed Mugabe, crippling infrastructure bottlenecks and drought, has triggered the US dollar shortage.
A vehicle importer says he has been unable to pay his suppliers for five weeks and will have to downsize his operations if payment conditions are not eased. Quest Motors, a local vehicle assembler, says it has sold just 40 units this year and is operating at below 1% of capacity.
Few believe the introduction of the bond notes will provide the solution — the notes are derided on social media as “Zimbabwe dollars that went to private school”.
But Zimbabweans, badly burnt by the hyperinflation of 2005-2008, fear that in an effort to ensure it can pay its bills, the government will “de-dollarise” and bring back a local currency. Another option is to adopt a different currency, such as the rand.
“Unless things change soon, forced de-dollarisation by September is a distinct possibility,” says a bank economist.
The government last week pushed back public servants’ June salary payments by three weeks, as well as pensioners’ benefits. With state revenues 12% below budget expectations in the first three months of the year, the government borrowed $245m — about 1.7% of gross domestic product (GDP) — in Treasury bills. It needs to raise at least another $600m during 2016.
In a bid to manage the US dollar scarcity, the authorities are promoting the use of debit and credit cards, while encouraging households and companies to use other currencies, notably the rand.
Through currency and import controls, it is also prioritising the allocation of dollars to four sectors. But the priorities have already been reshuffled in response to political pressure, with foreign payments for education elevated to “priority one”. That followed demands by heavyweights in the ruling Zanu-PF party whose children are educated abroad. Bankers say it is a worrying indication that the priorities will be revised randomly even as companies face closures.
And while nine currencies are legal tender under the multi-currency system, in practical terms Zimbabweans are dependent on US dollars.
“The government wants me to buy food with Chinese and Japanese cash,” says an attendant at a filling station battling unsuccessfully to get a point-of-sale machine to accept a Visa card. Both currencies are legal tender in Zimbabwe. “Where do I get that money?”
Financial Times