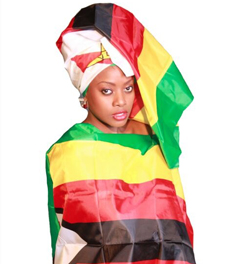 ZIMBABWEAN youths must shun “disrespecting our past”, former UK Big Brother star Makosi Musambasi said on Wednesday on the eve of Zimbabwe’s 33rd independence from white colonial rule.
Makosi, now resident in Harare, posed for pictures wrapped in just the Zimbabwe flag in a naked show of patriotism.
She told New Zimbabwe.com it was important for all Zimbabweans to reflect on “how we got here” as the country celebrates independence.
“There are brave men and women who sacrificed their lives for our liberation. You don’t have to be a fan of the current crop of politicians to appreciate this,” she said.
“Hundreds went to prison for fighting unjust colonial oppression; mothers lost children but never saw their graves. No matter how much we shout change, how we got here will never change!”
Makosi said “instead of disrespecting our past”, Zimbabwean youths born after independence in 1980 had to “find a way to fit in and take over the button” of leadership from the generation of liberation.
The 32-year-old former cardiac nurse has publicly declared her admiration of President Robert Mugabe and pledged support for his Zanu PF party.
Several events will be held around the country on Thursday to celebrate independence.Advertisement