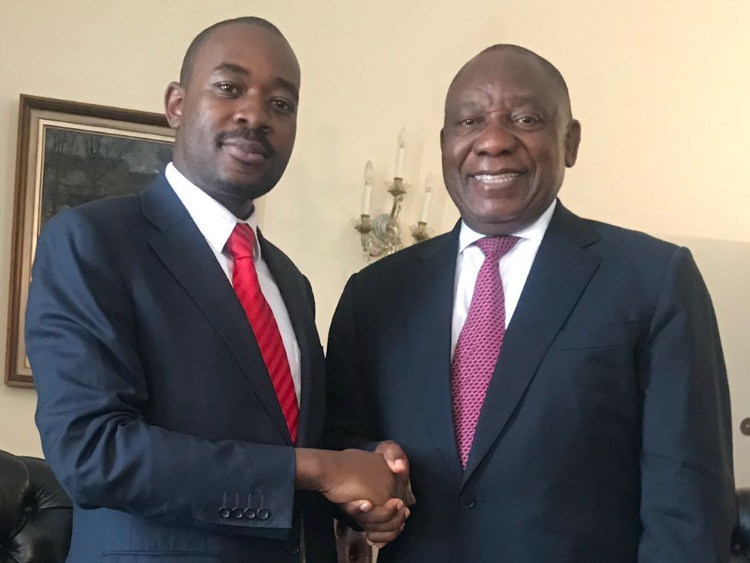 NELSON Chamisa Thursday appealed to South Africa President Cyril Ramaphosa’s administration not to ignore the growing political crisis in Zimbabwe by “burying its head in the sand, and having an ostrich mentality.”

The president of the newly formed Citizens Coalition for Change (CCC) is in South Africa on a private visit.

Speaking to South Africa’s national broadcaster, SABC, following the launch of the CCC in Harare Monday, Chamisa said it was time the neighbouring country assisted Zimbabwe in ending the country’s two-decade-old political and economic crisis.

“Don’t bury your head in the sand. Don’t have an ostrich mentality. Zimbabwe needs you. We have a crisis, a governance crisis, a leadership crisis, and that is a political problem that must be fixed,” he said.

“Zimbabwe is broken. Let us fix Zimbabwe. We need the support and helping hand of Africa. South Africa must come to the show. Help us to resolve our fundamental issues. Support the struggle for democracy in Zimbabwe. It is not about a political party, Zanu PF. Zanu PF has ceased to be a vehicle for the emancipation of the people, a progressive vehicle.”

“Support the people of Zimbabwe in solidarity. Come and help us.”

Last November, South Africa announced it would not renew Zimbabwe Exemption Permits (ZEP), a move that will affect hundreds of thousands of Zimbabweans working in the neighbouring country.

In recent days, there have been reports of Zimbabweans living in South Africa being evicted from their homes or vending sites by the locals.

The Zimbabwe government has since appealed to its citizens in that country to be vigilant.

Over three million Zimbabweans are living in South Africa, most illegally as economic refugees.

Turning to the launch of CCC early this week, the outspoken politician said they decided to do away with the past as they were “tired and no longer interested in the toxicity and negativity with the past brand of the MDC because of infiltration and Mr. (Emmerson) Mnangagwa and Zanu PF’s attempts and shenanigans to divide the people’s movement.”

“It is completely a new kid on the block. People are excited. We are telling people that it is possible for the sun to rise again. The basket of bad apples has now been flushed out. We are left with purity. I must thank Mr. Mnangagwa for the splendid job to take away those who have been retarding progress, those who want money, those who want opportunities, those who want trinkets and trappings of office.

“We are on a mission, an emancipation project, a freedom project to free Zimbabwe. We are doing everything to make sure that no stone, no corner is left unturned. We don’t want the ballot to be replaced by the bullet.”

Chamisa added he was confident the new political outfit would win the 2023 elections.

“We won the elections in 2018 and we will win the elections again in 2023 and the only difference is that when we won in 2018, we could not secure our victory because of objective and subjective reasons, but we have since corrected those.

“In fact, in 2018 we were not ready and strong as we are. Mind you President (Morgan) Tsvangirai passed on in February. We only went into the elections three months after and got over two million votes, Mr. Mnangagwa did not get that number.

“2023 is already in the bag, that is why Mr. Mnangagwa and Zanu PF are so scared of us. They have tried every trick in the book.”