DEFENCE minister and re-appointed Zanu PF National Chairperson, Oppah Muchinguri-Kashiri was the bearer of supposed good tidings at the just-ended party congress in Harare announcing every delegate would get regalia, loaf of bread and a 10 kilogramme pack of maize seed.

She was, however, quick to chastise rogue elements from looting apparel, loaves of bread and bags of maize seed saying such acts were tantamount to “theft of presidential generosity.”

As congress drew to a close Saturday, President Emmerson Mnangagwa pampered attendees with T-shirts, scarfs, caps and 5,000 loaves of bread as well as maize seed as a token of appreciation for attending the crunch indaba.

The four-day event was part of a well planned endorsement fiesta for the octogenarian leader, who is seeking a second and final term in next year’s harmonised elections.

Muchinguri-Kashiri gave the ‘heart-warming’ announcement of the trinkets before cautioning some Zanu PF members against theft of “generosity of the President.” 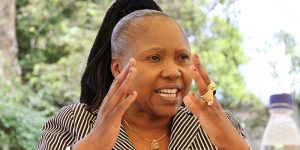 “I have been told, Your Excellency, that you have prepared a regalia package for every delegate and, therefore, I advise those that will be responsible as the President observed and advised not to keep the regalia. Give the regalia to the intended beneficiaries,” the defence minister said.

“I want to also announce that it was not possible to bring the maize seed. The President has set aside 60 tonnes of seed and each member will receive 10 kilogrammes.

“Also, the last item are 5,000 loaves of bread. So these will be distributed tomorrow (Sunday) as you leave,” said Muchinguri-Kashiri.

Congress witnessed endorsement of President Mnangangwa as the party’s sole candidate in 2023 polls in which he squares off against arch rival Citizens’ Coalition for Change (CCC) leader, Nelson Chamisa, among others.

During congress, Mnangagwa preached unity and tolerance among party members ahead of next year’s plebiscites.

In his closing remarks, he also pledged to spearhead fair and equitable distribution of farming inputs support throughout the country.

“Now that the 2022/23 agricultural season has begun, go back to farmers, and communities at large, and inspire them across all sectors to increase production and productivity and say that is the Zanu PF way,” Mnangagwa said.