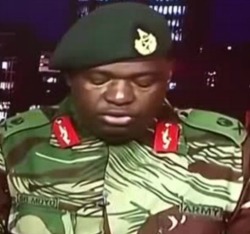 Last week at the World Economic Forum, Zimbabwe’s new president, Emmerson Mnangagwa, declared: “Zimbabwe is now open for business.”
Mnangagwa’s appearance in Davos, Switzerland, was a first for his country, which had been ruled by Robert Mugabe since independence in 1980.
Now, following Zimbabwe’s apparent change of leadership last year, many in the international community are eager to invest. The United States and other long-time supporters of Zimbabwe’s democratic forces should not, however, fall for a poorly veiled charade of a military junta.
The rush to assist a country as it emerges from the clutches of a brutal dictator is understandable, even praiseworthy. In such situations, the United States and its allies should support the forces of freedom and economic opportunity. This was the response in many places across Africa, including Ethiopia after the fall of Mengistu Haile Mariam, Liberia following the ouster of Charles Taylor, and most recently in Gambia. These were true historical transitions. Zimbabwe’s is not.
In November 2017, Mugabe was placed under house arrest and ultimately ousted by his own army. Thousands of people flooded the streets, alongside tanks and uniformed soldiers, to celebrate. But this was no popular uprising restoring democracy; rather, it was a well-orchestrated coup designed to maintain the status quo. In Zimbabwe, sadly, the dictator may be gone, but the dictatorship remains.
Mnangagwa is not the cartoon dictator of the past. He is savvier and knows how to play the international game. He has pledged to hold “free and fair” elections by late August and to revive a failed economy. A slick public relations and aggressive social media campaign have led to sympathetic press coverage and a warm reception in Davos.
Mnangagwa is hoping to attract investors and convince the United States and others to lift targeted sanctions on him and his allies for past human rights abuses. Mnangagwa is also pushing hard for the World Bank to help to repay its massive debts and secure new loans.
Yet it’s far too soon to embrace the junta or to bail it out.
First, the “new regime” in Zimbabwe is hardly new. While Mugabe and his wife, Grace, have departed, those in control are the very same henchmen who kept Mugabe in power for nearly 40 years.Advertisement

The new vice president, Constantino Chiwenga, is the army general who led a de facto coup in 2008. After the opposition defeated Mugabe at the polls, Chiwenga organized a brutal campaign of violence and intimidation to keep Mugabe in power.
Sibusiso Moyo, the officer wearing camouflage fatigues and a beret who announced the army takeover on state television, is now foreign minister. And the list of Mugabe acolytes in power goes on and on.
Second, despite the rhetoric, Mnangagwa has no intention of losing by the ballot. His officials have already admitted that the military will safeguard their survival. Top adviser Christopher Mutsvangwa recently said: “We will win resoundingly. … We will mobilize heavily working with the [Zimbabwe Defense Forces].”
State media has also begun again to demonize human rights activists and political opponents, while the party has a long record of vote rigging and manipulation. None of this portends a free and fair vote.
Third, Mugabe’s plundering wasn’t alone. While the regime talks about business, it is the same cabal that systematically destroyed Zimbabwe’s economy. Mnangagwa and his allies have enriched themselves for decades by seizing farms, mines and businesses. Zimbabwe reportedly has $15 billion in missing diamond mining revenues. The notion that these same people are suddenly reformers who can engineer a robust recovery is farcical.
Finally, there are the war crimes. In the early 1980s, government forces murdered an estimated 20, 000 civilians, including women and children, in the operation known as Gukurahundi, or in the local Shona language, “the rain that washes away the garbage.” A chief architect of the massacres was Mugabe’s state security chief at the time: Mnangagwa. To this day, not a single officer or politician has been held to account.
Mnangagwa, who publicly dismissed its victims as “cockroaches,” was asked about the massacres in Davos. He played down the events and refused to apologize. Whitewashing the junta serves only to deny Zimbabwe a genuine democracy.
Lending new money to a kleptocratic cabal only strengthens the forces of corruption. And embracing a war criminal abets crimes against humanity and turns our backs on the survivors who are yearning for justice and accountability. Zimbabweans, after suffering for so long, deserve better from the international community.
This article is taken from the Washington Post