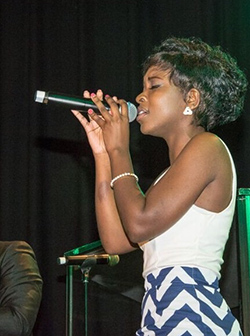 AUSTRALIA based budding songstress, Fortune Ruzvidzo has struck a double fortune following a lead singing role in Brisbane City Gospel Choir’s latest offering Melody and the successful release of her maiden single.
The Zimbabwe-born artist started her musical journey in style with the single Salvation Glory and Power getting rave reviews in online platforms. All the CDs of the track were sold out barely a week after the launch.
But Fortune, who lives in Brisbane, had a lot more to celebrate after a securing prominent role in BCGC, a rising Brisbane multicultural gospel ensemble.
The 22-year-old songwriter sang lead in their new release, Melody, which has also been met by an overwhelming response from as far as the US.
Ruzvidzo believes BCGC offers her an opportunity to advance her musical abilities.
“I’m excited about BCGC because the majority of the people in the group are music-literate, which makes it easier to work with them.
“We have gifted musicians who are extremely professional,” she told NewZimbabwe.com in a recent interview.
Ruzvidzo has done several BCGC concerts that include Harvest House International Church’s Christmas at Dutton Park, the Easterfest, a yearly Easter festival in Queensland, as well as Blues on Broadbeach, a yearly concert in the Gold Coast, in addition to various weddings.
But it is her uniquely arranged worship song, pulled from a Bible scripture in Revelations 19, which sets her solo career in motion.
“I was going through the book of revelation and this song came to me,” she explained.
The song is already giving gospel lovers a fresh lease of life and has been described as a heavenly proclamation. The song is selling on online platforms including iTunes.
Fortune’s desire is to spread spirit-filled worship music to the church and to the world.
“I would like to bring a new sound; a sound that doesn’t leave people thinking ‘oh that’s good music’, but a sound that leaves people in awe of God’s love and grace; a sound that draws people to that secret place of worship and, mostly, a sound that changes people inside out,” Ruzvidzo said.
She started singing from a tender age through primary school and was in the choir for three years in high school.
“My dad says I started singing at age seven. I remember officially singing at Amakhosi Theatre at about age 9,” recalls the talented muso.Advertisement

Ruzvidzo, who has written over 30 songs to date, will soon start work on her maiden album which she intends to launch next year.
But her utmost desire is to travel the world and be of influence to others.