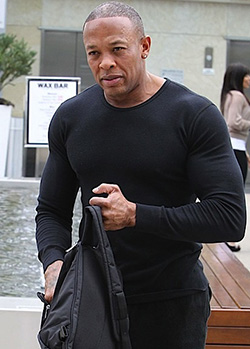 WITH $620 million in estimated pre-tax earnings, veteran rapper and record producer Dr. Dre topped Forbes list as the highest paid hip hop artist, ousting Sean “Diddy” Combs from the top spot.
Forbes said Dre’s estimated annual earnings for the 12 months between June 2013 and 2014 are the highest of any musician in any genre it has ever evaluated, and more than the combined takings of the other 24 names on the hip-hop list released on Tuesday.
Much of the 49-year-old’s earnings this year came thanks to the $3 billion sale to Apple of the Beats high-end headphone company he founded with music executive Jimmy Iovine and other financial ventures, including cognac and vodka brands.
Combs, 44, tied for second place with Jay-Z, 44, with $60 million, with earnings from drinks, clothing and television deals.
Jay-Z, who toured with his wife, Beyonce, for the first time with their “On the Run” concerts, pulled in money from lucrative performances, his latest album and his Roc Nation entertainment empire, which assured him a place in the top five.
Drake, 27, came in fourth with $33 million with takings from his album “Nothing Was the Same,” an endorsement deal with sportswear firm Nike and a concert tour.
Grammy-winning duo Macklemore & Ryan Lewis rounded out the top five with $32 million.
Forbes compiled the list by looking at income from record sales, publishing, merchandise sales, tours and endorsement deals and talking to managers, agents, lawyers and some of the artists.
The earnings were calculated based on data from Pollstar, RIAA (Recording Industry Association of America) and Nielsen SoundScan.
Fees for agents, managers and lawyers were not deducted from the estimates.
“Happy” singer and music producer Pharrell Williams, who joined the NBC television singing competition “The Voice” as a coach this season, slipped into the top 10 with $22 million.Advertisement