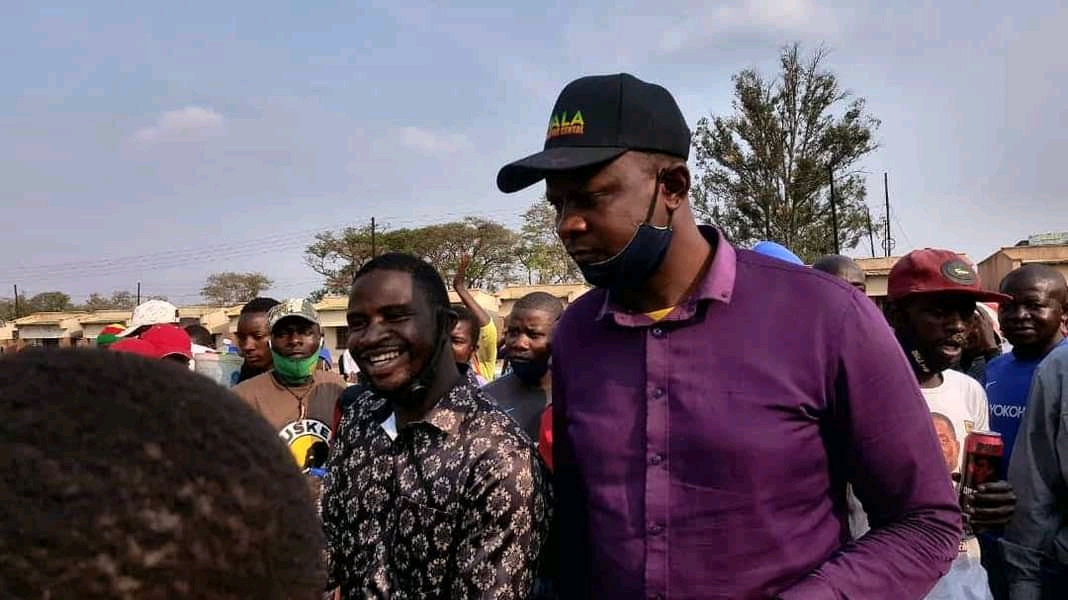 Zanu PF Maclean Nyamucherera (in purple shirt) brought business at Kwekwe council to a standstill when he wept during a discussion on allocation of vending stalls in the city Thursday.
Spread This News
By Staff Reporter
THERE were exhilarating dramatic scenes at Kwekwe City Council Tuesday when the only Zanu PF Kwekwe Councillor, Maclean Nyamucherera, openly wept during a full council discussion on the allocation of vending stalls.
Nyamucherera brought business to a standstill at a full council meeting after letting out a wail while mayor Angeline Kasipo was addressing Councillors.
The ward 6 Councillor accused fellow his colleague Eric Rukavhairo, who is a health committee chairperson of not only capturing council but also tormenting vendors.
Nyamucherera, in her crying stupor, said Rukavhairo was blocking the allocation of vending stalls to known vendors in Central Kwekwe.
“Rukavhairo why are you tormenting vendors like this? Why are you not allowing vendors to trade in the CBD? People are suffering but you are blocking the allocation of vending stalls, why are you behaving like this,” Nyamucherera said.
Mayor Kasipo had to temporarily suspend proceedings.
Rukavhairo, however responded and said the allocation of vending stalls was going to be done procedurally.
“Vending stalls are going to be allocated procedurally. We are not going to make space for vendors in a procedural manner,” Rukavhairo said.
Tempers were high during the meeting as Nyamucherera went on a tirade and accused the MDC Councillors of undermining him because he is the only Zanu-PF councillor in the chamber.
“You are not taking my submissions and ganging up against me because i am the only Zanu PF councillor in the chamber. I am not going to rest on the issue of vendors. I will make noise until you grant them space. Blackman (Masango Matambanadzo former Kwekwe Central MP) would give vendors some vending spaces. What’s wrong if i identify and suggest somw vending space? Why is Rukavhairo blocking me and doesnt want to allocate space to vendors?” he asked.
Mayor Kasipo would not hear of it.
“We are not here to discuss politics but issues which affect residents. So we must desist from political discussions,” she said.
Meanwhile, Nyamucherera has been accused of swindling money from vendors-allegations he has refuted.
“I didn’t swindle any money neither did i collected any money from any vendor for allocation of a vending stall. Vendors had their own committees which handled money. These accusations are from my political enemies. If i committed any crime they must report me to the police, ” he said.
Asked on his strange behaviour at town house Nyamucherera said he was moved by the plight of vendors.
“I am moved by the vendors plight and how someone is blocking them on eking out a living. Its really painful to see people suffering like this while as council we can address the issue of allocation of stalls. I am going to continue championing the cause of vendors,” he said.