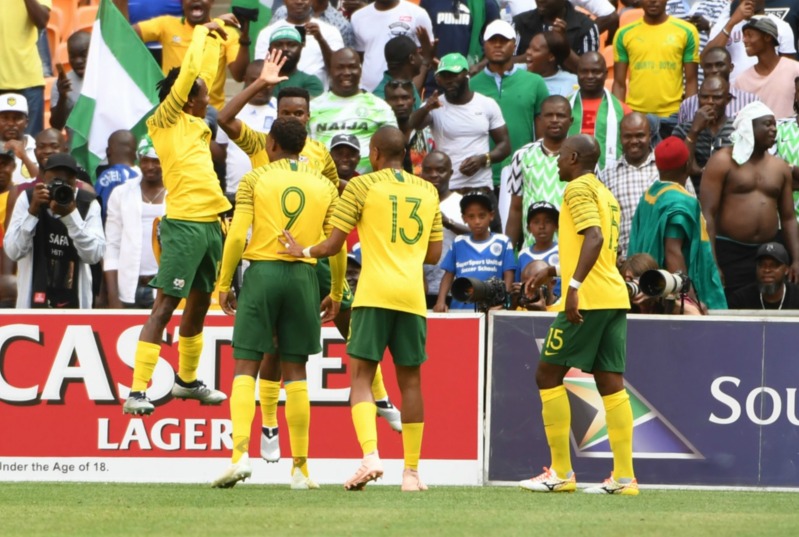 Nigeria were made to forget their Tokelo Rantie special deal as South Africa served up their new Percy Tau-Lebo Mothiba combo instead, Bafana Bafana toughing out a 1-1 2019 Africa Cup of Nations draw at FNB Stadium on Saturday.

But somehow, in meetings with South Africa, more often than not Nigeria seem to come out with the last laugh. The Super Eagles qualified for Cameroon 2019 with the result.

Bafana are left needing a far-from certain draw away against Libya in their final game in March.

Buhle Mkhwanazi’s ninth-minute own goal came to a Super Eagles piling on the early pressure. Mothiba, set up by a sublime piece of skill by Tau, equalised in the 26th.

The result, fighting back from a goal down, might have boosted Bafana’s morale following their insipid 0-0 away draw against Seychelles last month.

They have beaten arch-nemesis Nigeria for the first time in a competitive game in these qualifiers, 2-0 in Uyo in June, and drawn at home.

But that draw horror against Seychelles, who have been thrashed in every other game, including 8-1 by Libya on Saturday, may still come back to haunt Bafana – despite remaining unbeaten and in second place in Group E with a match to go.

A team this schizophrenic, who can beat or match Nigeria on one day, and not beat Seychelles on another, leaves no guarantee at all of the South Africans coming back with a draw against Libya in north Africa, who they could only manage a 0-0 result against in Durban.

Bafana coach Stuart Baxter opted for Thulani Serero as a deep striker behind Mothiba, and the Vitesse Arnhem forward was decidedly lackadaisical on his return to the fold, raising questions on whether his third exile should have been broken at all.Tau, deployed on the left, but operating everywhere, was irrepressible.

Mothiba might not have had the service but bustled against big, physical defenders and added to his impressive strike record with his fourth goal in five senior starts.
Bafana dominated the second half, where Nigeria sat back and played for the draw, but the South Africans might have been more aggressive committing numbers forward for combinations given a stalemate or a defeat would still leave them needing a draw against Libya.

As had happened in Bafana’s win in Uyo, the South Africans began nervy and on the back foot to a Nigeria determined to stamp their authority with intensity and intelligent quick-passing movements.

One such intricate build-up down the left flank saw the dangerous Saudi-based Ahmed Musa teed up on the edge of the area to force a diving save from Itumeleng Khune.

Three minutes later the Eagles’ pressure resulted in a goal. Samuel Kalu beat Sifiso Hlanti down the right and whipped in a cross, Mkhwanazi deflecting a header that beat Khune at the goalkeeper’s near post.

Cape Town City right-back Thamzanqa Mkhize had a a mistake-ridden first half, though it was his piece of skill that restored some momentum to Bafana when he beat left-back Collins Jamilu and squared perfectly between the runs of strikers Mothiba and Tau.

Still, a goal for Bafana seemed a tall ask. Then Tau displayed the cheekiness of a court jester and vision of an eagle to see the space, niftily poking the ball behind three defenders on the edge of the area to burst through and side-foot to Mothiba, who swept into an open net with keeper Ezenwa Ikechukwu stranded.

The goal gave the South Africans the confidence to come out dictating play in the second half. Early on Mothiba teed up Serero for a volley in the area, directly in front of goal, the Vitesse player miscuing over the bar.

Serero was replaced by Thembinkosi Lorch in the 61st.

As much as Bafana pushed, the Super Eagles were now content to clip their wings and play it conservative for a draw that would be enough for them to qualify, as Bafana found it harder to pry openings.

Nigeria centreback Kenneth Omeruo got up to glance a header wide of the upright from Kalu’s corner.