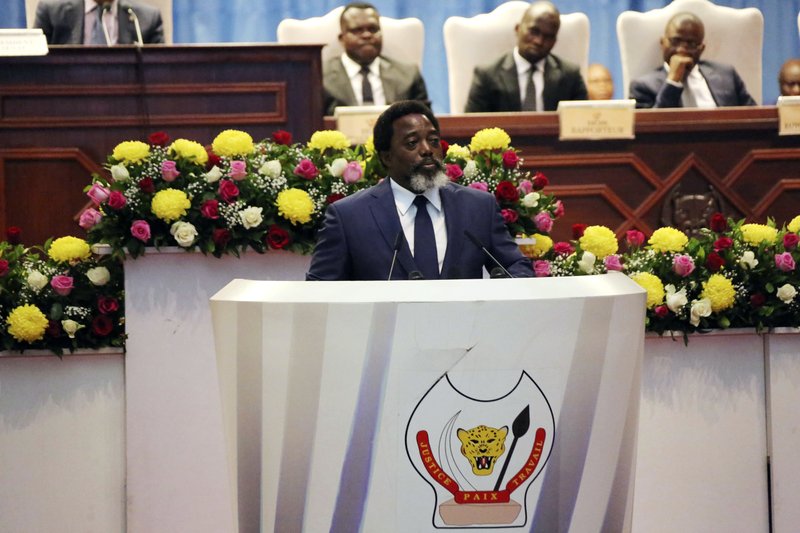 KINSHASA: President Joseph Kabila said in a national address Thursday that Congo’s long-delayed December election will go ahead but he still gave no indication what role he will play as the deadline for candidate announcements approaches.

Kabila’s speech to the National Assembly and Senate had been widely anticipated as the opposition worries he will try to stay in power.

The president confirmed the Dec. 23 election date, adding that “our commitment to respect the constitution remains unequivocal.”

Kabila, upset by what his government has described as meddling by outsiders, said Congo must remain in control of its destiny and will fully fund the elections itself.

Congo is “not willing to receive lessons in democracy, especially not of those who murdered democracy in this country and elsewhere,” he said.

The U.N. Security Council and the African Union Peace and Security Council underscored in a joint communique late Thursday that “elections must lead to a peaceful and democratic transfer of power.” They expressed concern at “the continued deterioration of the security and humanitarian situation” in Congo and urged all political parties “to reject violence of any kind.”

The United States is among a number of Western countries that have expressed concern over delays in the election, which originally had been scheduled for late 2016.

Last week U.N. Secretary-General Antonio Guterres told reporters that visits by him and other diplomats to Congo had been postponed because Kabila soon would announce “important decisions” and “the president doesn’t want to give the impression that he’s doing so because of international pressure.”

Guterres added he would be “very comfortable” with the postponement if it meant the “right decisions” would be announced.

It was not immediately clear what effect Kabila’s new comments would have.

Kabila’s mandate ended in December 2016. His government has blamed the delays on the difficulties of organizing an election in the vast Central African country roamed by dozens of armed groups. The constitutional court has ruled that Kabila, in power since 2001, should remain in office until the vote, though he is barred from running for another term.

Candidates for president must declare by the first week in August.

In June the government launched the Common Front for Congo, bringing together a large number of political parties. Kabila is considered its moral authority, and some observers have expressed concern that this is another means for him to assert control.

Looking back over his stay in office, Kabila said he had “worked to create favourable conditions for the emergence of a strong and prosperous Congo,” adding that what he accomplished once seemed impossible “because we inherited a catastrophic situation.”