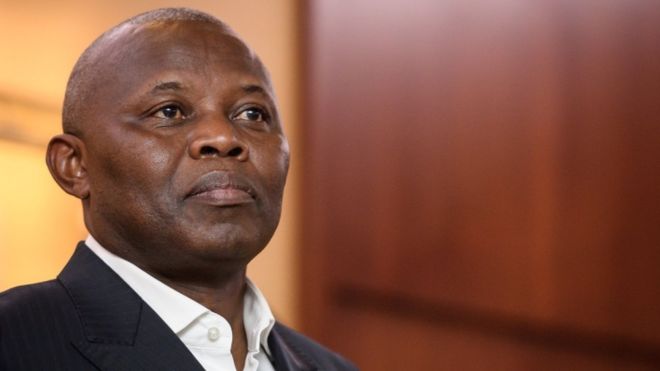 A COURT in the Democratic Republic of Congo has found President Felix Tshisekedi’s chief of staff guilty of corruption.

Kamerhe’s supporters say the trial is a political move designed to prevent him from standing for president.

The judge presiding over the case was murdered in May.

Kamerhe, who was also a key ally of a former president, is the most high-profile figure to be convicted of corruption in the DRC.

He was convicted by a court in the capital Kinshasa on Saturday.

Much of the missing funds were intended to be used in a housing project announced by the president following his inauguration.

Lebanese businessman Jammal Samih was also sentenced to 20 years’ hard labour in the same trial, while a third man in charge of logistics at the presidential office faces two years in prison.

Kamerhe will also be banned for running for the presidency for 10 years after completing his sentence.

His lawyers have said they will appeal, arguing that hard labour is prohibited by the DRC’s constitution, according to AFP news agency.

Anti-corruption activists have praised the verdict.

“I sincerely think that this is a positive sign for the fight against corruption,” Florimond Muteba of Congolese transparency organisation, the Observatory of Public Expenditure, was quoted as saying by Reuters news agency.

The trial continued with a replacement judge after the death of Judge Raphael Yanyi in May. An initial police report said he had died of a heart attack.

But a post-mortem examination later found Yanyi “died a violent death, due to the blows of sharp points or knife-like objects, which were thrust into his head”, the country’s justice minister said.