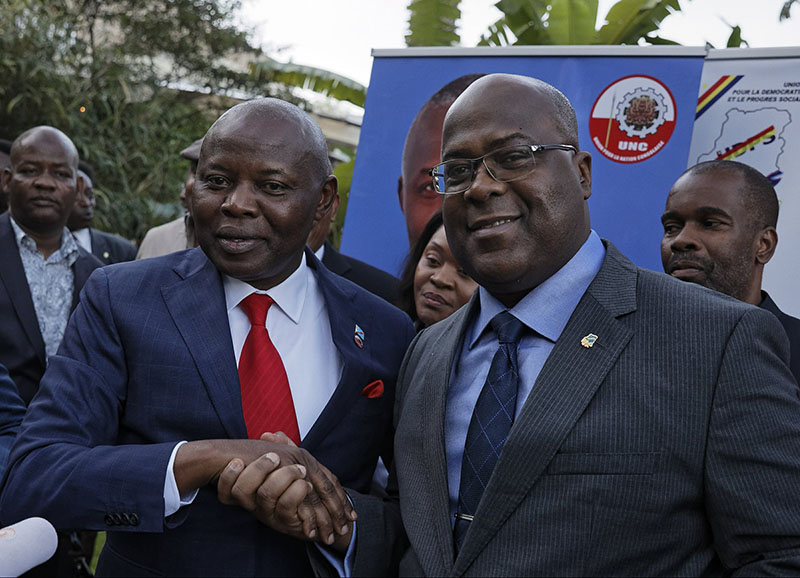 KINSHASA: Congo’s two leading opposition parties announced Friday they are joining forces for a run at the presidency after withdrawing from a wider pact to support a single contender against President Joseph Kabila’s chosen candidate.

Felix Tshisekedi with Congo’s most prominent opposition party said he will represent his party as well as that of Vital Kamerhe with one month left before the long-delayed Dec. 23 vote in the mineral-rich Central African nation. This could be the country’s first peaceful, democratic transfer of power.

Congo’s election was meant to take place in late 2016. While Kabila this year said he would step aside, the opposition fears he will assert power behind the scenes if Shadary wins.

Tshisekedi, son of the late opposition icon Etienne Tshisekedi, on Friday urged other opposition candidates to “join hands so we can win this election.”

The announcement means a three-way contest with Kabila’s preferred candidate, the new Tshisekedi alliance and Fayulu, who has had the support of two opposition leaders barred by Congo’s government from running: former vice president Jean-Pierre Bemba and Moise Katumbi, former governor of the copper-rich Katanga region.

The earlier announcement of Fayulu’s candidacy prompted uproar among supporters of Tshisekedi’s Union for Democracy and Social Progress party, prompting some to set tires ablaze in the capital, Kinshasa.

Within 24 hours, Tshisekedi and Kamerhe, who came third in the 2011 presidential election, withdrew from the deal.

The opposition parties have spent months trying to unify behind a candidate in an election that has caused significant concern in the international community about the possibility of a rigged vote.

Congo has dismissed concerns about its groundbreaking use of voting machines that critics say could pose a technical nightmare in a sprawling nation of more than 40 million voters where infrastructure is dodgy and dozens of rebel groups are active.

Kabila has been in power since 2001 and his mandate expired in late 2016. But he has remained in office while organising elections, a move his critics say was aimed at maintaining his grip on power.

The Common Front for Congo political platform created by Kabila for the election called Friday’s announcement a “non-event.”

“With the opposition it is always the same thing, one does not know what they really want,” lawmaker Pius Muabilu, a member of the campaign team, told The Associated Press. “The people will decide, and they know who loves the country and who does not.”