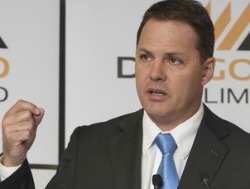 DRDGOLD has announced it will update shareholders on the sale of its Zimbabwean exploration projects and the ERPM assets in South Africa when it releases its full-year results.
The company wants to recoup the US$4.37m it has spent on exploration in Zimbabwe and haspackaged its five assets there for sale. One option may be selling them for shares in another company, taking exploration spend off its own balance sheet.
By selling the Zimbabwean assets, the old ERPM underground mine and the deep-level exploration prospects in South Africa, DRDGold will become a pure surface-treatment operation.
The focus at DRDGold was to bring a new circuit to its Ergo tailings treatment plant near Brakpan into full production in about September this year, marking the last big capital outlay in the business, CEO Niel Pretorius said on Thursday.
Speaking at the release of DRDGold’s results for the three months to March, marking the third quarter in its financial year, Pretorius said the company had no more large projects and it wanted to widen its profit margin as it bedded down its assets.
DRDGold will increase expenditure on finding innovative ways to extract more gold from the material it treats. About half the gold in feedstock ends up on new tailings dumps.
The new circuit at Ergo is designed to capture the 37% of gold locked up in pyrites. DRDGold could deploy this technology to unlock gold in Zimbabwean tailings dumps and it is an avenue it is exploring.
DRDGold has about R55m left to spend over the next two quarters on the new circuit. “It’s a number well within our means … and we can see this project to completion without dipping into funds we’ve set aside for our shareholders,” Pretorius said.
Adrian Hammond, an analyst at BNP Paribas Cadiz, asked during the results presentation what DRDGold would do with a growing cash pile.
DRDGold chief financial officer Craig Barnes said budgeted spend of R340m for this year would drop about 50% in the following one.
Pretorius said the focus of the board was to prove the DRDGold’s operating model, secure more institutional shareholders invested in the company, widen the profit margin and reward shareholders.
Barnes said the profit margin on an all-in cost basis was 14% and that would grow and allow the board to be more aggressive in its dividend policy.Advertisement

DRDGold posted headline earnings, which strip out exceptional items, of 14c per share for the quarter, a 17% improvement from a year ago. Gold revenue grew 16% to R531m.