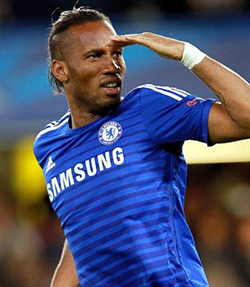 DIDIER Drogba’s charity foundation to help causes in Africa has been cleared following an investigation into “serious regulatory concerns”.
The Charity Commission launched a probe into the Didier Drogba Foundation earlier this year after the Daily Mail claimed just £14 115 ($17 764, 16 668 euros) out of £1.7 million donated to the former Chelsea star’s charity had actually been used in Africa.
In the article, the Mail claimed that £439 321 was spent putting on “lavish” fundraising parties attended by celebrities, and more than £1 million “languished” in bank accounts.
But Drogba, who currently plays for Montreal Impact in Major League Soccer, said he had spent his own sponsorship earnings first and planned to use UK fundraising money for future projects.
And the 38-year-old’s Foundation has now been cleared following the investigation.
“We have been able to satisfy our most serious concerns in relation to the charity by confirming that funds have not been misapplied and that all funds raised in the English charity’s name have been held by the English charity,” a Charities Commission statement read on Thursday.
“We are also able to confirm that we found no evidence of fraud or corruption on behalf of the charity.”
Drogba, a Premier League and Champions League winner with Chelsea, added: “The Charities Commission has today confirmed after a seven-month investigation, that no funds have been misapplied by my Foundation, and that there has been no financial wrongdoing, no fraud and no corruption.
“I am pleased that this supports what we always said from the start which is that the claims made by the Daily Mail back in April were entirely false.”
The Didier Drogba Foundation was set up in the Ivory Coast in 2007 and registered in the UK as a separate entity in 2009 to allow Drogba to raise funds while in England playing for Chelsea.Advertisement