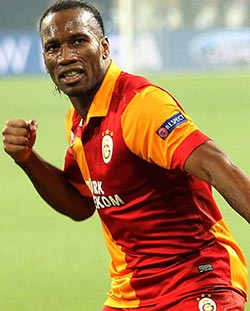 GALATASARAY’S Didier Drogba will be full of emotions when he strides out to face former club Chelsea on Wednesday but Jose Mourinho knows the striker will be as clinical as ever on the field.
The Champions League last-16 first-leg clash in Istanbul is the first time the Ivorian has been on the pitch with the Blues since scoring the winning penalty when Chelsea lifted the trophy in May 2012.
The 35-year-old, who media reports say could return to the London club as striker coach, is Chelsea’s record European scorer with 34 goals in 69 games.
Including the spot kick in the Munich shootout and his header late in normal time, he has also bagged nine goals in nine domestic and European finals. His sizeable contribution to the club’s recent history is apparent from the number of posters of him still dotted around Stamford Bridge.
“It’s a strange feeling but, as we know him so well, we know that for him no friends during the game,” Chelsea boss Mourinho, who managed Drogba during his first spell at the club, told reporters.
“Before the game, big friends and big respect for a legend. After the game, the same. But, during the game, we have a job to do. He has his nature, he wants to score, he wants to win. I think it is a tie to go until the end.
“He deserves a reception here even better than mine, because he deserves much more than me. For Didier, double or three times better and bigger than I had.”
Drogba moved to Chelsea in 2004, Mourinho’s first season, and stayed after the Portuguese departed in 2007.
He left the club a few days after their Champions League triumph, saying he had achieved everything he wanted with Chelsea, before spending a few months playing in China and then moving on to Turkey.
Previous meetings
Mourinho, who rejoined Chelsea in the close season, has already experienced playing against Drogba in the Champions League.
He was at Inter Milan four years ago when they took on Drogba and Chelsea and also held the reins at Real Madrid last year when the Spanish giants met Galatasaray.
Both times Mourinho was on the winning side.
Galatasaray manager Roberto Mancini, who is no stranger to Premier League side Chelsea after coaching Manchester City for four seasons before joining the Istanbul club last September, was not too optimistic about his side’s fate.Advertisement

“I know Chelsea very well. For us it will be a very difficult game because Chelsea are used to playing these important games but we want to play a good game if it’s possible,” the Italian said.
“They have improved a lot in the last two months. We went through in a difficult group with Real Madrid and Juventus and I think it was a miracle. Now we are here and I don’t know if we can do another miracle but we want to try. In football never say never.”
As well as Drogba, Galatasaray will rely on Mourinho’s ex-Inter playmaker Wesley Sneijder as well as Selcuk Inan, whose penalty gave them 1-0 victory over Istanbul rivals Besiktas on Saturday.
Mourinho is hoping Brazil defender David Luiz and Nigeria midfielder John Obi Mikel, who missed the 1-0 win over Everton on Saturday with minor injuries, will be fit for Wednesday.
Oscar is carrying a knock while January signings Mohamed Salah and Nemanja Matic are cup-tied.