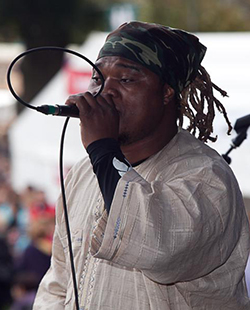 DRUMMER Wilson Magwere fled his native Zimbabwe 10 years ago because of his music – but now he is bringing Belfast youngsters together with the same talent.
Performing at the launch of Belfast Mela, the 35-year-old brought a smile to everyone’s face with his interactive One People, Nice People song.
As well as being one of the star performers at the festival this Sunday, Wilson has been working with kids from Belvoir as part of Mela’s year-round outreach work.
“It’s incredible how much they love drumming,” he told the Belfast Telegraph.
“They can be pretty quiet at first but whenever they see the drum they all come running over. Drums really are something that brings all the kids together, wherever they come from.”
Wilson was just 25 when he was forced to flee troubled Zimbabwe.
“I moved here 10 years ago, now I have a seven-piece band and we play all over Ireland,” he said.
Wilson will be one of a host of acts playing at Belfast Mela, taking place at Botanic Gardens on Sunday.
The one-day festival – now in its eighth year – started initially as an Indian community event and has expanded to showcase a range of different countries’ cultures.
This is part of an article originally published by the Belfast TelegraphAdvertisement