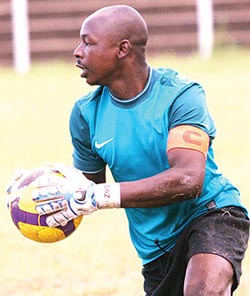 ZIMBABWE international goalkeeper Tafadzwa Dube is reportedly club hunting following the expiry of his contract with Caps United.
However, Caps United said they are keen to renew his contract, adding talks with Dube will resume once he returns from South Africa.
The veteran goalkeeper who had been deemed excess to requirements at FC Platinum shone like a beacon when he was given the chance at Caps United last season which earned him a call to the national team.
Dube is currently in South Africa with the Warriors for the African Nations Championships.
Caps United coach Taurai Mangwiro said on Wednesday they would open talks with the player once he returns from national duty.
“We want to retain the goalkeepers we had last season. Tafadzwa Dube’s contract with us expired last year and we want to re-engage him.
“We will open talks with him once he returns from South Africa where he is on national duty,” said Mangwiro who has only Jorum Muchambo as the only experienced goalkeeper.
The Harare giants are also hoping to bring in an assistant foreign coach to strengthen their technical team following the departure of Saul Chaminuka who joined newly promoted premiership side ZPC Kariba.
Former Eagles coach Mike “Dread” Madzivanyika has already been roped in as one of the assistant coaches while the club is still waiting to interview Richard Tswatswa for the goalkeeper’s position after Brenna Msiska was side-lined in a restructuring exercise that could see him being redeployed to the juniors.
Tswatswa, who is also the goalkeepers’ coach of the Warriors-is still in South Africa with the national team for the African Nations Championships.Advertisement