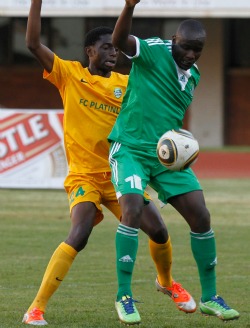 Caps United 2-1 FC Platinum
CAPS United goalkeeper Tafadzwa Dube was the star of the show, pulling off several spectacular saves, including a penalty, as the Harare giants edged FC Platinum 2-1 in a Castle Lager Premiership tie at the National Sports Stadium on Sunday.
Visiting FC Platinum, now under the guidance of Tenant Chilumba, have yet to beat United since their promotion into the top flight league some three years ago.
And Dube, deemed excess to requirements at the Zvishavane-based side, denied his ex-employers a chance to break their duck with an exhibition of the art of goalkeeping which kept his side in the game for long periods.
The stopper was probably at his best when Nelson Mazivisa was brought down in the penalty box by Ronald Pfumbidzai in the 82nd minute and Mutare referee Langton Chitsa pointed to the spot.
Mazvisa – last season top goal scorer – accepted responsibility for the spot kick but Dube dived to his right with his outstretched arm to block the effort and the stadium rose in acknowledgement of a great piece of technique.
At the final whistle Dube received a standing ovation with some fans throwing US dollar notes as he walked to the dressing room.
“It’s the best feeling ever. It was a tough match but I am happy with the performance today,” said Dube afterwards.
“I knew I would save that penalty. It was good timing. It’s a good victory for the team. I didn’t want to lose to my former team.”
Chilumba said his side struggled in defence after losing skipper Daniel Vheremu through injury in the 25th minute.
“We struggled in defence after losing Vheremu through injury. We missed his experience,” he said.
“Most of them are still young. But I liked the spirit in the team. We are still in contention for the league title. This game has given us points to work on as we prepare for the next fixture.”
FC Platinum started off brightly with Mitchell Katsvairo directing his effort wide after an exchange of passes with Mazivisa on four minutes.
But the visitors appeared to struggle especially in defence after losing captain Daniel Vheremu through injury Raphael Muduwiva coming in as a replacement in the 26th minute.
Caps United also made a change three minutes later – bringing on Moses Muchenje for Takudzwa Muhori.
The absence of Vheremu was immediately felt as Dominic Chungwa exposed FC Platinum’s defence frailties on 30 minutes when he easily breached the backline before drilling a low ground shot past Petros Mhari who kept goal for Chilumba’s side.Advertisement

The goal appeared to have deflated their hopes as they played second fiddle to the hosts. But the visitors also had opportunities towards the end of the first half with Winstone Mhango watching in disbelief his well taken free kick being spectacularly saved by Dube.
Mitchel Katsvairo was also denied by the upright post from 25 metres out just before the break.
In the second half, Caps had a good opportunity on 50 minutes but Tendai Samanja’s speculative shot was saved by Mhari.
However, four minutes later, Muchenje, who came on for Mahori in the first half, headed home off a cross from Ronald Pfumbidzai.
Samanja came close again on 55 minutes but his powerful long range drive missed target by a few inches. In the 78th minute, Thabani Kamusoko’s free kick sailed over the bar.
Still, Platinum thought their moment had come when Mazivisa was brought down in the penalty box by Ronald Pfumbidzai. However, Mazivisa watched in disappointment as Dube denied him with a spectacular save.
Kamusoko could have pulled one back for the visitors but his rasping shot was tipped over by Dube.
They got it right two minutes from time after Tawanda Munyanduri handled inside the box and Allan Gahadzikwa made no mistake from the resultant spot kick.
However, the goal could not stop Caps to extending their dominance over the Zvishavane side as the referee blew to end the match.
Weekend Results
Sunday: Highlanders 2-1 Black Mambas, Harare City 2-0 Tripple B, Buffaloes 1-3 Shabanie Mine, Black Rhinos 2-1 Triangle
Saturday: Motor Action 0-2 Dynamos, How Mine 0-1 Chicken Inn