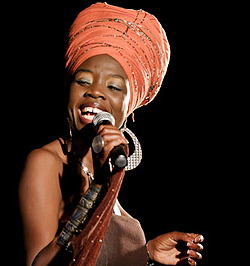 THE High Court on Wednesday granted bail to jazz star Dudu Manhenga pending an appeal against her sentence over culpable homicide.
Justice Felistus Chatukuta freed the 33-year-old star on US$200 bail and stringent reporting conditions with the consent of State lawyers.
Manhenga was, two weeks ago, sentenced to 18 months in prison for culpable homicide and driving without supervision on a learner’s licence.
Her attorney, Evans Moyo of Scanlen and Holderness, approached the High Court after the trial magistrate refused her bail pending an appeal against the sentence.
Justice Chatukuta freed her after Edmore Nyazamba of the Attorney-General’s Office indicated that they were not opposed to her release.
Manhenga was convicted on her own guilty plea over a March 15, 2010, road traffic accident in which a biker was killed.
Investigators the star only had a provisional driver’s licence when she crashed into motor-cyclist Graham Martin Millward along Sherwood Drive in Harare’s Mabelreign suburb.
She is said to have failed to give way to Millward as she turned right into the driveway of a residential property in her Toyota Spacio vehicle.
Millward suffered horrific injuries and died upon admission at the West End hospital.Advertisement