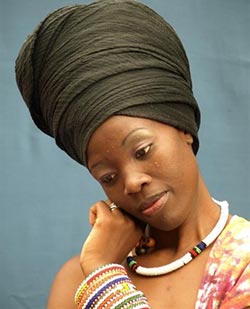 JAZZ Sensation, Dudu Manhenga  is currently in Ghana ahead of a two-day concert to be held in Kumasi on the 6th and 7th of March.
The concert is meant to celebrate Ghana’s independence anniversary and supporting artistes include Bertha, Efya, Okyeame Kwame, Offie Kodjoe, and Sir Freeman.
Manhenga is a dynamic young Zimbabwean singer/songwriter who leads and fronts the group Color Blu.
She has returned to the stage after being sentenced to 18 months in prison last year for culpable homicide.
Dudu was released from Harare’s Chikurubi prison after the High Court granted her bail pending appeal against her conviction and sentence.
The case stemmed from a traffic accident that occurred on the 15th of March, 2010, which resulted in the death of Graham Martin Millward in Harare’s Mabelreign suburb.
Meanwhile, along with her husband and partner drummer, Blessing Muarutsa, she formed this group in 2001, out of which sprung their debut nine-track afro jazz fusion album Out of the Blu in 2003.
The album was warmly received by the music-loving public and contained songs which became hits like Mvura, Bengimthandile and Madlaminin.
Her style is influenced by great African and jazz singers, and the dignity of her delivery is a credit to her and to her country, wherever she goes.
Dudu Manhenga Kude