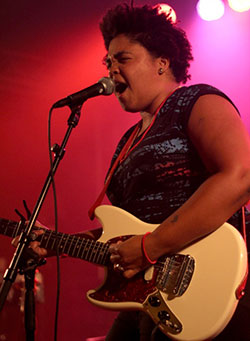 RINA Mushonga recently released her debut album called The Wild, The Wilderness. The Zimbabwean – Dutch singer known for her touching warm tones and striking texts. A sound that comes from intimate to grand and exhilarating.
For Mushonga it all started when she was 17 years old and still living in Zimbabwe.
“I started at that age to act,” she says. “I had been, since I had piano and guitar lessons, busy writing his own songs, often to the frustration of my music teachers because I had not practiced then.”
The singer grew up in Zimbabwe, studied in England and has now been living, for several years, in Amsterdam.
It is not entirely illogical that the inspiration for her music includes influences from these different periods.
“It’s not that I think ‘now let me put this line in an African’, but that it is part of who I am. I grew up with those sounds, but also with Pearl Jam and Tori Amos.
“So I think, in that sense, every time and experience contributes something to what I do and the music I make now. Perhaps, therefore, it is so difficult to place … haha.”
Of course there are many things in daily life which Mushonga’s inspiration knows how to get out.
“I get inspiration from artists like Justin Vernon and Sia. Not only the music they make, but especially their drive to combine styles together. For example, how they work on many different projects and different types of music making in addition to their ‘own’ music.
“I like that too, very much. But I also get a lot of inspiration from Dance Theater. NDT (Dutch Dance Theatre) is always something I am blown away by; what’s possible in terms of creativity, movement and images for me.
“I think what they are so incredibly beautiful and inspiring. That emotion, that theatrical and visual power I try to assemble. My music, movies and literature inspire me very much. I ‘m really just a sucker for beautiful images and a good story.”
In February, Mushonga released her debut album, which was made in 2013 in the southwest of England, in a converted barn.
Rina Mushonga – Eastern Highlands