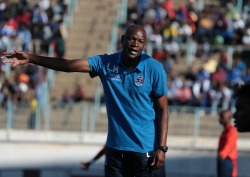 DYNAMOS finally broke the Rufaro jinx on Sunday, recording their first victory at home against battling Ngezi Platinum in a Castle Lager Premiership tie.
Skipper, Augustine Mbara, thrust Dynamos ahead with a headed goal on thirty seven minutes before Rodreck Mutuma came off the bench to score the insurance goal on 67 minutes for the Harare giants to register their first victory at Rufaro this season.
It was also their first time to score at home in a league match this season after a sluggish start under the guidance of Portuguese coach, Paulo Jorge Silva.
It had been a trying week in which the Dynamos family were mourning the death of eight fans in a road accident on their way to Gweru to watch their team play Chapungu. The former champions were also facing the possibility of playing the Sunday match in an empty stadium before their appeal against the ruling.
Coach LIoyd Mutasa said they owed their victory to the departed eight supporters.
“This one is for them. We owe it to our supporters who died in a road accident. There was an instance where we were supposed to play this match before an empty stadium, but we thank the management that allowed the fans to come and witness this victory at home. It was never going to be easy but two goals for us; it’s a great feeling,” said Mutasa.
Ngezi FC Platinum controlled the match in the first 15 minutes, with Keith Murera coming close on nine minutes only to be denied by a brilliant save from goalkeeper Tonderai Mateyaunga.
After thirty one minutes, James Marufu missed another opportunity, blazing the ball over the bar after winning possession near the penalty area.
But seven minutes later, Mbara got to the end of a corner kick by Godknows Murwira to head home the opener which sent the stadium into jubilation.
In the second half, Masimba Mambare came close with a rasping shot on 55 minutes. Mutuma, who had come in for Carlos Rusere two minutes earlier, ended the game as a contest with a cool finish from a cross by Mambare on 67 minutes.
Ngezi Platinum, however, continued to threaten but Dynamos remained resolute in defence.
Ngezi coach, Clifton Kadurira, said they failed to convert their chances.
“It’s the same old story. We are failing to score. We got our chances but couldn’t put them away. Dynamos got their chances and scored. We will try to beef up the team in the transfer window to improve our scoring,” said Kadurira who will deputise Tonderai Ndiraya with effect from Monday.Advertisement