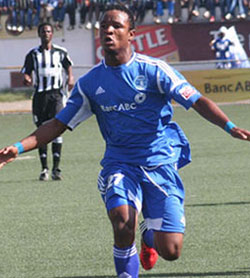 DYNAMOS are aware of the possibility of losing key players who are participating at the Chan tournament in South Africa.
This comes in the wake of reports from South Africa that a number of agents have visited the Warriors hotel in Cape Town inquiring about some players.
The development has put the Harare giants who have seven players at Chan at great risk jeopardising their Caf Champions League campaign.
Already struggling to find a lethal striker to add to their Champions League squad whose late registration closes on Wednesday, Dynamos have found themselves in a fix to retain national team players they have so far registered with Caf.
Star defender Partson Jaure who is captaining the Warriors is one player who they risk losing.
Goalkeeper George Chigova’s name has also been tossed around together with striker Simba Sithole.
Other Dynamos players at Chan include their vice-captain Tawanda Muparati, defenders Augustine Mbara, Oscar Machapa and new signing Themba Ndlovu.
Dynamos chairman Kenny Mubaiwa admitted they face a tricky situation.
“We have got wind of what is taking place in South Africa so we are closely monitoring the situation there. What is happening has placed us at risking losing players,” Mubaiwa said.
“Our policy here is that we do not block anyone from moving to a foreign club because it would be for the good of their career. But in this situation which is a bit tricky we will fight to retain our players and allow them to move when the atmosphere is more conducive.
“We have the Champions League coming up in the near future so we need to have all our best players because we want to conquer Africa,” he said.
Mamelodi Sundowns is the biggest club that ha besieged the Warriors camp after the club’s representatives stormed the team’s hotels armed with a contract for Bantu Rovers winger Kudakwashe Mahachi.Advertisement