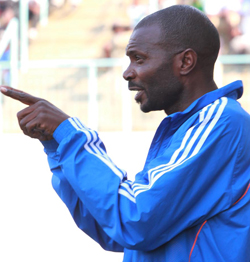 DYNAMOS have assured coach Callisto Pasuwa that his job is safe following an executive meeting on Tuesday.
During a season-defining three weeks, the Premier League champions crashed out of the Champions League and have seen their title defence get off to a slow start with four draws.
But Dynamos say they are keeping faith with Pasuwa, for now, with an Independence Trophy final against Highlanders to come on Thursday before the two teams meet again in the league at Barbourfields on Sunday.
Dynamos spokesperson Chris Kasiyazi said: “It was a frank meeting where the coach explained the problems he is facing. He said nearly half of the players were still new in the team and that the team has been affected by injuries.
“As the executive, we resolved to give all the support he needs to ensure we get the results. We have never intended to fire the coach but there were stakeholders who had expressed their displeasure over the performance of the team.
“We have not set any target for the coach because what we don’t want is to put him under pressure. We want him to operate freely and hopefully results will start coming on Thursday.”
Pasuwa has been under immense pressure from a section of the Dynamos supporters who have been campaigning for his exit after nearly two years at the club which he also served as a player.
The Glamour Boys have been restricted to 1-1 draws by Black Mambas, Chicken Inn and Shabanie Mine before Premier League newcomers Triangle forced a goalless draw at Rufaro on Sunday.
Apart from injuries to a number of players, Pasuwa has been at pains to point out that he lost the nucleus of his title-winning side during the off-season.
Playmaker Denver Mukamba joined South Africa’s Bidvest Wits while chief strikers Rodreck Mutuma and Simba Sithole, moved to Bloemfontein Celtic and SuperSport United respectively.