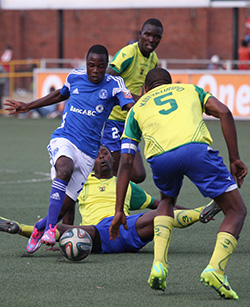 Harare City 3-5 Dynamos
DYNAMOS had to flex their muscles to shrug off a spirited challenge from Harare City, beating them 5-3 in a thrilling Castle Lager Premier Soccer League match at Rufaro Stadium on Wednesday.
The victory was Dynamos’ biggest of the season with defender Ocean Mushure, Cliff Sekete, Rodreck Mutuma and a brace by substitute Washington Pakamisa scoring the goals that counted for the champions to collect maximum points and maintain the top spot.
The victory took Dynamos to 53 points three ahead of second placed ZPC Kariba who also saw off Buffaloes 3-1 with three matches left before the end of the campaign.
Dynamos were dominant in the first half with Mutuma and Sekete missing opportunities but left-back Mushure thrust them ahead, beating William Manondo on the edge of the area before slamming home on 38 minutes.
However, James Jam levelled matters three minutes into the second half, pouncing on a loose ball laid into space by Osborne Mukuradare following a good cross by Talent Chawapiwa on the left.
That goal by Harare City appeared to have given Dynamos resolve as Sekete got to the end of a cross by Ronald Chitiyo to score a downward header with City defenders guilty of ball watching.
But the home team refused to be cowed into submission with big striker Francesco Zekumbawira hitting the nets with a brilliant curler on 59 minutes.
However, Harare City finished the match with 10 men after veteran defender David Kutyauripo was sent off for a second bookable offence.
Kutyauripo brought down Chitiyo just outside the penalty area as he charged into the danger zone after weaving his way through a cluster of defenders.
Referee Munyaradzi Majoni did not hesitate to send him off. Mushure then hit a stunning free-kick which Pakamisa connected home on 66 minutes.
In the 70th minute, Mutuma made it four, header into the nets off a free kick by Mushure.
However, Mushure who was the outstanding player for Dynamos on the afternoon appended Osborne Mukuradare in the penalty area on 78 minutes and Mukuradare took responsibility to beat goalkeeper Mukandi for his side’s third goal.