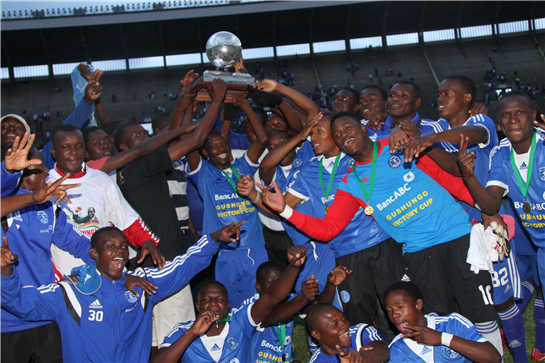 DYNAMOS compounded Highlanders woes after they came from behind to beat them 3-2 in a dramatic penalty shootout of the Gushungo Cup challenge at the National Sports Stadium on Sunday.
An estimated crowd of about 3,000 fans turned out to watch the match organised to celebrate president Robert Mugabe’s victory in last year’s harmonised July elections.
Highlanders had started brightly, soaking all the pressure and even threatened to snatch victory although Dynamos launched a series of raids only to be let down by Simba Sithole who missed chance after chance which saw the match spilling  into the penalty shootout following a goalless draw.
Charles Sibanda and Innocent Mapuranga had converted their spot kicks while Dynamos’ reliable penalty taker Augustine Mbara and Fabrice Mbimba had missed theirs.
However, Valentine Ndaba, Gabriel Nyoni and goalkeeper Munyaradzi Diya went on to miss while Ocean  Mushure and Oscar Machapa converted their spot kicks leaving Blessing Moyo to wrap up the contest  for the champions with his well taken spot kick.
The match was attended by high ranking government officials including Justice Legal and Parliamentary Affairs minister Emmerson Mnangagwa who was the head of the organising committee and guest of honour.
Dynamos walked away with $45,000 and a trophy while Highlanders pocketed $35,000.
But Highlanders coach Mark Mathe believes his charges played one of their best games this year.
“It’s not that Dynamos are clever or that it was about their tactics; it’s just their time because this is perhaps our best match ever,” said Mathe.
“We were very compact and when it came to penalties. I said to my players I want one more ounce of character but Dynamos had the mental strength.”
Dynamos coach Kalisto Pasuwa admitted Highlanders had a good game.
“The opposition was strong today. They were very compact and it was not easy,” he said.
“When Augustine our regular penalty taker missed, I was a bit nervous, I thought we would lose but in the end we won. I would want to thank everyone including the supporters.”Advertisement