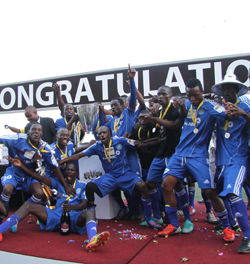 DYNAMOS begin their quest for a third Mbada Diamonds Cup crown on the bounce when they face Tripple B at Gibbo Stadium in Triangle on Sunday.
This year’s tournament winners are guaranteed rich pickings, with a cool US$130,000 on offer for the champions.
Dynamos won the inaugural competition in 2011 after beating Motor Action, and successfully defended their title last year with a victory over Monomotapa.
Having lost out of the BancABC Sup8r Cup after falling to eventual winners Shabanie Mine in the semi-finals and sitting at the top of the Castle Premiership, assistant coach Richard Chihoro believes they are in the right frame of mind for another double.
“We want to complete another league and cup double and keep this trophy. While this is a knockout cup competition and all teams would want to beat the defending champions, I’m really hopeful we will sail through to the quarterfinals,” Chihoro said on Friday.
“We will not underestimate Tripple B simply because they are struggling in the league. They will fight like wounded lions and with real hope of an upset because it only takes four games to win this tournament, unlike the league,” he added.
Striker Washington Pakamisa is doubtful for Dynamos after picking up a knock on Tuesday.

Tripple B coach Peter Manoti said all the pressure will be on Dynamos.
“They are the defending champions so they will be under pressure more than us. We will play our normal game, but we are hoping for a surprise. We need the money more than them, so we will give it our best shot,” Manoti said.
Last year’s runners up Monomotapa face red hot Harare City at Rufaro on Sunday, determined to reach the final again. But with the way they have been playing in the league, having lost five consecutive matches and falling into the relegation zone, anybody’s money is safe with City progressing to the quarterfinals.
Highlanders, who are yet to win a major trophy since the 2006 league triumph and the 2010 Independence Trophy, have been struggling in cup competitions of late and will be desperate to a avoid a banana skin against Triangle on Sunday.
The match at Barbourfields will be live on Supersport 9 at 3PM after the How Mine/Black Rhinos encounter which starts at 1300hrs and will also be screened live.Advertisement

Shabanie Mine rekindle their rivalry against Chicken Inn on Saturday at the scene of their BancABC Sup8r triumph at Mandava in Zvishavane, seeking passage into the last eight. Both teams already have something in their cabinets with Chicken Inn having won the Net One Charity Shield and this match is just self motivational for the players.
PSL basement side Motor Action is at Sakubva on Saturday, once their home ground, against CAPS United who have only lost once in their last 11 matches.
FC Platinum, losing finalists against Shabanie in the BancABC Sup8r, face a tricky tie against Hwange at the Colliery on Sunday seeking to make amends.
Mbada Diamonds Cup First Round