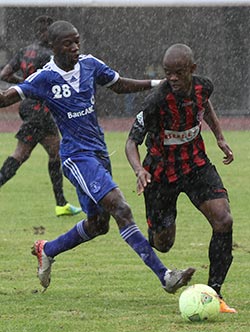 Dynamos 3-0 Mochudi Center Chiefs
DYNAMOS put one foot into the first round of the African Champions League after dismantling Botswana Champions Mochudi Center Chiefs 3-0 in a rain-soaked first leg of the preliminary round at the National Sports Stadium on Sunday.
Two goals from Washington Pakamisa including a controversial penalty in the second half and a Masimba Mambare header helped the Zimbabwe champions to a comfortable win at home.
However, referee Anibal Antonio Armando from Mozambique had to stop play for 25 minutes just 15 minutes into the first half after rains which pounded the stadium had washed away the lines.
Dynamos threatened to run over their opponents who fielded Zimbabwean players Arnold Chaka and Elvis Meleka as they launched a series of raids but the visitors who appeared content with a draw sat back in their own half thwarting everything Dynamos threw at them.
The rains made play very difficult but the visitors did crack in the second half with Pakamisa drilling a low ground shot past a couple of defenders to send the stadium into a frenzy.