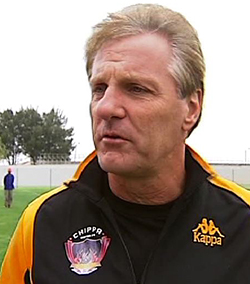 CAPS United new coach Mark Harrison will be in charge of his first Harare derby on Sunday as his charges clash with Dynamos in the $25,000 Sino-Zim Cement Challenge Cup at Rufaro.
The Sino-Zim Cement Cup was arranged by the Chinese Federation of Zimbabwe to celebrate 35 years of cordial relations between Zimbabwe and China.
Winners are set to pocket US$15, 000 while US$10,000 has been set aside for the losing team.
Harrison was appointed Caps United mentor in January.
He however, started work this week after missing three weeks of pre-season work as he was still in South Africa waiting the processing of his work permit.
This is the first game between the two sides this season. Both clubs will be using the friendly match as a dress rehearsal for the upcoming season.
The PSL has said the season would kick off on March 7.
The 54 year old English coach said he was aware of the high expectations from the hard-to-please supporters but appealed for patience.
He emphasised that he would use Sunday’s match mainly to assess his playing personnel.
“I am aware of the rivalry between the two teams. I am aware of the derby between Dynamos and Caps United. It’s a massive game for the two teams,” said the coach.
“I have played in derby matches myself so I know what it is about. It is a very important match for us. It will give us a yard stick of where we are as a team and where we are going. But after assessing the players at training we still have a lot to do.
“I have missed most of the training and so have a lot of some catch up to do but I am not going into this match with high expectations because this is a process. It’s going to be tough but obviously we want to put up a good show.”
Caps United this week signed Rodreck Mutuma from Dynamos.
Harrison rates the striker highly, describing him as the biggest signing in the Premier Soccer League this season. He says he will build his team around him.
United started their pre-season late under assistant coaches Brenna Msiska and Fungai “Tostao” Kwashi.
They have also roped in former Highlanders coach Mark Mathe into their technical team.
Dynamos also have new coach in David Mandigora who will be seeking to step up his preparations following last weekend’s friendly games against newly promoted side Whawha FC and Chapungu.Advertisement

Dynamos have taken part in a series of friendly matches in their pre-season preparations while Caps United have played just two practice games against Ngezi Platinum and Dongo Sawmill.