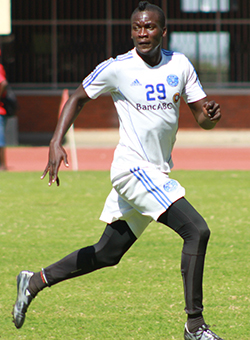 DYNAMOS captain Augustine Mbara has been suspended ahead of the Premier Soccer League clash against ZPC Kariba at Rufaro Stadium on Sunday.
According to the PSL, Mbara will serve a suspension for accumulating three yellow cards in the two matches against Highlanders and the other one against Hwange.
However, Dynamos team manager Richard Chihoro said Wednesday that apart from Mbara, everyone was raring to go.
“I can confirm we have received notification of the suspension of Augustine Mbara from the PSL but everyone else is ready for the match,” said Chihoro.
“We have registered so many players so I don’t think that will affect us much. In any case, it’s an opportunity for whoever will be picked to prove a point.
“But to face Sunday Chidzambwa a Dynamos son will be interesting.”
Dynamos are in fourth place on the league table with 29 points from 17 matches five behind leaders Chicken Inn.
The defending champions have won just once in their last five matches and drawn the other four matches including back to back draws against Hwange.
Tonderai Ndiraya is now in charge after taking over from David Mandigora.
The new coach will be seeking to register his first league win after winning in the Chibuku Super Cup against Whawha and also beating the Defences Select side on penalties to win the Defence Forces Cup on Heroes day.
Chidzambwa will also be facing his former club for the first time, having last coached them some 16 years ago. But he has had a sluggish start since he bounced back into coaching about two months ago.
His four games since taking over the reins at ZPC Kariba have yielded one win the recent victory over Caps United in the Chibuku Super Cup, one draw and three defeats.
FIXTURES
Saturday: Harare City vs Dongo Sawmill (Rufaro), Chicken Inn vs Chapungu (Luveve), FC Platinum vs Hwange (Mandava), Tsholotsho vs Triangle (White City), Flame Lily vs Caps United (Larfarge)
Sunday: Dynamos vs ZPC (Rufaro), How Mine vs Highlanders (Barbourfields), Whawha vs Buffaloes (Ascot)